How often have you plopped a left-over baked potato, sill tightly wrapped in foil, on your kitchen counter, thinking you could heat it up or for a meal the next day or cut it up for a potato salad for an afternoon picnic.

STOP. Don’t do that. Why? Because that still-wrapped potato can actually be deadly if left out too long, according to federal and state food-safety experts.

The culprit here is botulism, a severe type of food poisoning. It’s caused by a toxin produced by a bacterium known as Clostridium botulinum. Botulism is an important disease to know about because of how deadly it can be if not treated immediately.

How deadly is it? It’s so powerful that one teaspoon could kill 100,000 people. That means that even consuming a very small amount of this toxin — even just tasting a food that contains this toxin — can make you sick.

The unusual thing about the botulism toxin is that it grows in the absence of oxygen. To make matters stranger yet, it also forms spores that are heat resistant, which can happen when the potato is being cooked. If these spores germinate and grow they can produce the botulism toxin.

That’s where the foil-wrapping comes into the picture. If tightly wrapped around a potato, it keeps oxygen out. And if the foil-wrapped baked potatoes are not kept at high or low enough temperatures, the spores can germinate. That’s when things can get dangerous.

This toxin can also survive regular cooking temperatures or survive in foods that haven’t been processed properly. Examples of this would be non-acidic foods such as string beans and meats that have been home-canned Other examples are unrefrigerated homemade salsa, honey (the primary cause of botulism in infants), garlic in oil, and traditionally prepared salted or fermented fish.

USDA advises that when the jars of low-acidic foods (string beans and meats, for example) are stored at room temperature, the botulism spores can germinate and produce the toxin.

The nitty gritty about this toxin is that it causes paralysis, which usually starts with the eyes and face and then moves down to the throat, chest and arms and legs. These symptoms usually show up 18 to 36 hours after eating the poisoned food but can vary from 4 hours to 8 days.

Weakness and dizziness followed by double vision are early symptoms that include trouble breathing, difficulty in swallowing and slurred speech. Constipation is another common symptom.

If left untreated, the chest muscles become fully involved. This inhibits breathing, and the person suffocates. Many patients are placed on ventilators.

If botulism is caught in the early stages, the injection of an antitoxin can lessen the severity of the disease by neutralizing any toxin that has not yet bound to nerve endings. However, because of the risk of serious side effects, the antitoxin cannot always be used. The advice here, of course, is to contact your health provider or go to the emergency room.

Cases of botulism from foil-wrapped baked potatoes are rare, but they do occur. One example occurred in El Paso, TX, in 1994, the largest botulism outbreak since 1978. In that outbreak, 30 people were sickened, and four of them had to be put on mechanical ventilators. The culprit was a baked-potato-based dip. The toxin formed when foil-wrapped baked potatoes were held at room temperature for too long a time before they were used in the dips. 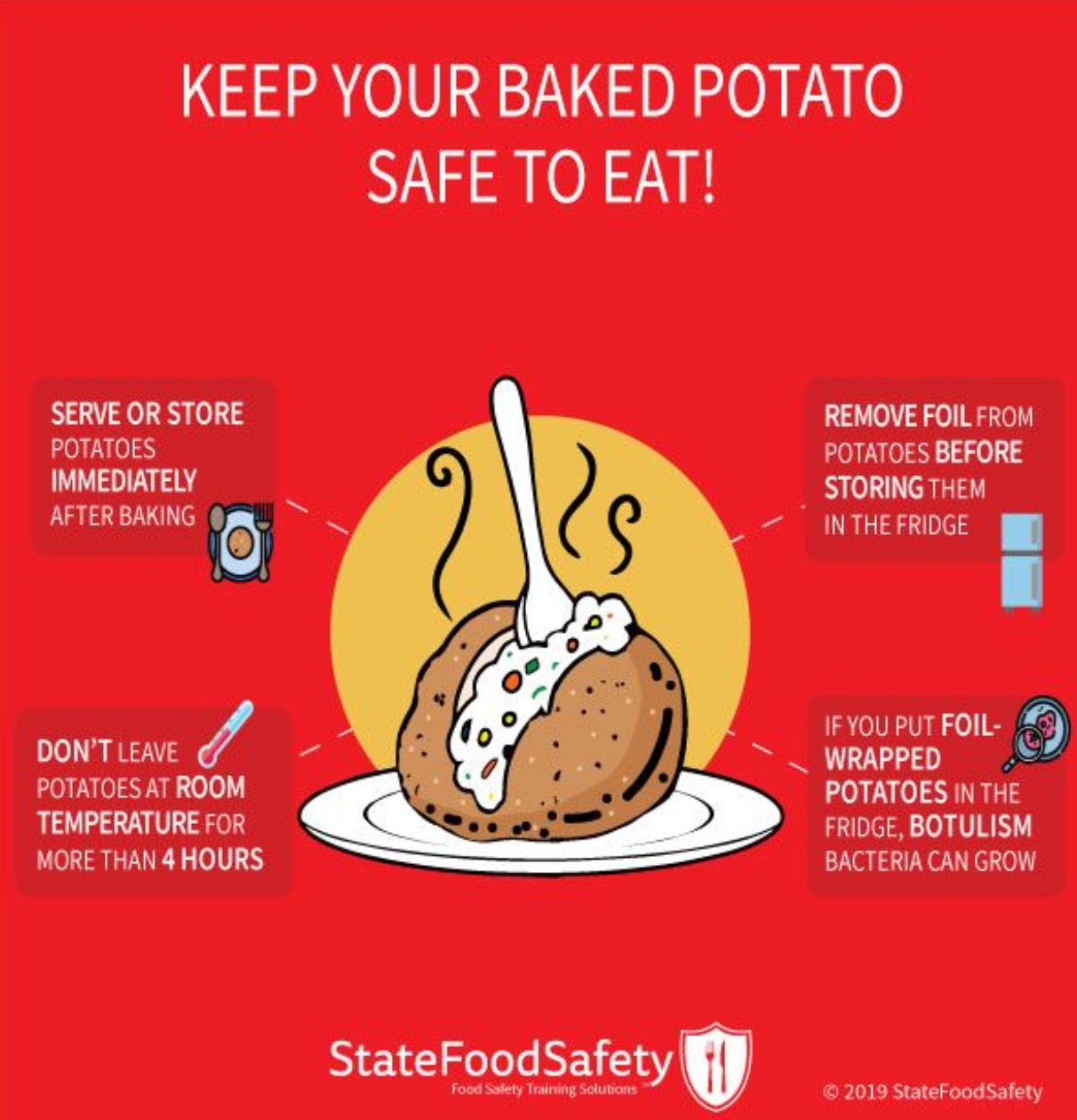 Surprisingly, cooked potatoes pose several food safety risks. That’s because they are considered a Time/Temperature Control for Safety (TCS) food. That according to information from a Potato Statistical Yearbook created by the National Potato Council.

Foods in this category are prone to bacteria growth for several reasons: They are moist, contain protein and have a neutral or slightly acidic pH. This combo lends itself to the growth of microorganisms and the production of toxins.

According to the industry’s statistical yearbook, a food in this category becomes risky when it is held too long in what is referred to as “the temperature danger zone” — temperatures ranging from 41 degrees F to 135 degrees F.

Bottomline: Keep hot foods hot (above135 degrees F) and cold foods cold (below 41 degrees F). Check the temperature every two hours. Any food in this category should be tossed if it’s been left out at room or outdoor temperatures for four hours or longer. No need to take any chances. If it’s hot outside, this time is reduced to two hours.

Make sure the potatoes are eaten within two hours of being cooked, or keep the potatoes at 140 degrees F or hotter. Or put them in the refrigerator within two hours of being cooked. This would apply to dishes such as mashed potatoes, potato soup, boiled potatoes, and potato salad. In the case of baked potatoes, remove the foil before putting them in the refrigerator.  If reheating the potatoes. make sure the temperature is 140 degrees F or hotter before serving them.

About potato salad
Grilling and potato salad go together. The important thing here is to enjoy sharing this favorite with friends and family. But it’s also important to make sure you’re not taking any chances when it comes to food safety. You don’t want to get anyone sick.

Although some potato salad recipes — and some well-meaning relatives — advise adding everything to the cooked potatoes while they’re still hot, this is not what food-safety experts advise.

Instead, they caution that if the cooked potatoes are not cooled down first, they could enter that “temperature danger zone.” This is also why they urge people to cool down cooked potatoes by putting them in the refrigerator before making potato salad.

But more than that, potato salad is usually made with mayonnaise or oil. They give potato salad a breeding ground for foodborne toxins such as salmonella or listeria when the correct temperature is not maintained. That’s why potato salad should be kept cold, either by putting the serving dish on ice or leaving it in the refrigerator or cooler until just before it’s served. You definitely don’t want to leave it languishing out in the  sun where it can quickly turn into a food safety hazard instead of a favorite dish.

Before cooking potatoes
Potatoes are grown in the ground, and even though store-bought potatoes are usually cleaned before being bagged or put out on the shelves, consumers and chefs should wash them under running water and scrub them with a clean vegetable brush.

A recent recall of bagged red potatoes was the result of a routine internal testing that identified Listeria monocytogenes on a piece of equipment in a packing facility  No illnesses were associated with the potatoes, but it underscores the importance of washing potatoes before cooking them throughly.

In addition,  as with all fresh produce, handwashing is important before and after preparing potatoes. Prepared dishes should be stored properly to maintain a safe temperature.

About potatoes
We do love our potatoes. In the United States, it’s the number one crop. Each year people in the U.S. consume about 110 pounds of potatoes per person. Europeans eat twice that much.

A little more than one-third of all potatoes grown in the United States are manufactured into frozen products, 85 percent of which are french fries.

The average American eats more than four pounds of potato chips each year.

Here are some nutrition facts about this popular vegetable, provided by the National Potato Council.