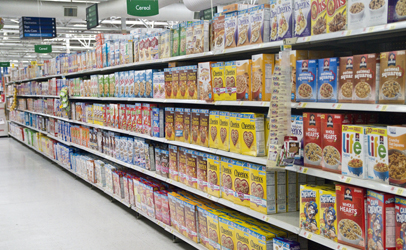 Many Americans don’t get enough of the vitamins and minerals they should, but the Environmental Working Group (EWG) is now concerned that children and other vulnerable populations are exposed to excessive and unhealthy amounts in the foods they eat. The EWG report out Tuesday highlighted the levels of vitamin A, zinc and niacin in breakfast cereals and snack bars. Of the thousands of products analyzed, 114 cereals were fortified with 30 percent or more of the adult Daily Value for at least one of the nutrients. And 27 of the snack bars had 50 percent or more. The list of “over-fortified” products includes General Mills Total Raisin Bran, Kellogg’s Cocoa Krispies and Kind bars. “Because the Food and Drug Administration’s current dietary Daily Values for most vitamins and minerals were set in 1968 and are woefully outdated, some products may contain fortified nutrients in amounts much greater than the levels deemed safe by the Institute of Medicine,” the report states. On one hand, the values are outdated for adults because the effects of taking in a high percentage of nutrients from fortified food have not been studied. Taking the issue a step further, nutrients are added to foods in amounts calculated for adults rather than for children, so it’s easier for children to consume more than they should.

The report focused on vitamin A, zinc and niacin because they are nutrients to which children are most over-exposed. A recent study from the National Institutes of Health and California Polytechnic State University found that from food alone — both natural and fortified — 45 percent of 2-to-8-year-old children consume too much zinc, 13 percent get too much vitamin A, and 8 percent consume too much niacin. Vitamin A, zinc, and niacin are necessary for good health, but doses that are too high can cause toxic symptoms. Too much vitamin A can lead to liver damage, skeletal abnormalities, peeling skin, brittle nails and hair loss. Too much zinc can impair copper absorption and negatively affect red and white blood cells and immune function health. Niacin may be less toxic than the others, but too much can cause rashes, nausea and vomiting. In February 2014, Mars Foodservices recalled its Uncle Ben’s Infused Rice after dozens of children had reactions from overexposure to niacin in the rice provided in school lunches. There is also concern about overexposure of vitamin A for pregnant women and older adults. Ingesting excessive vitamin A during pregnancy can cause developmental defects in the fetus. The best source for the necessary nutrients is fresh foods, says Olga Naidenko, an EWG research consultant and co-author of the report. If parents are going to buy fortified foods for their children, they should look for products that contain only 20-25 percent of the Daily Value of these vitamins, she says. EWG recommends that parents monitor their children’s intake of fortified foods, especially if they also give their children a daily multivitamin pill, and that pregnant women and older adults also watch their intake. As FDA is currently making plans to update Nutrition Facts labels, EWG is calling for products marketed to children to display the percent of Daily Values specific to each age group, such as 1-to-3-year-olds and 4-to-8-year-olds. The report includes the Nutrition Facts label from three cereals — Cheerios, Rice Krispies and C is for Cereal — that have outlined Daily Values for both adults and children. In addition, EWG is urging FDA to modernize the 1980 guidelines on voluntary food fortification, base food fortification policy on specific risk assessments for each nutrient and population group, and address food manufacturers’ misuse of food fortification guidelines and nutrient content claims to sell more products. Naidenko told Food Safety News that EWG plans to include this issue in its comments on the proposed rules to update Nutrition Facts labels. “The other big piece is that FDA has not proposed to do anything about the use of fortification for marketing, and that’s a problem,” she said, adding that companies frequently fortify foods specifically for marketing purposes. In August 2013, Marion Nestle published a blog post about FDA’s intention to study the effects of nutrient-content claims on consumers’ attitudes about food products. “Any health or health-like claim on a food product — vitamins added, no trans fats, organic — makes people believe that the product has fewer calories and is a health food,” Nestle wrote. “As I keep saying, added vitamins are about marketing, not health.”