A Wilmington, NC-based produce dealer known as Farmer’s Friend is suing Don Hugo Produce Inc., its Texas supplier of cilantro from farms in Puebla, Mexico. The litigation was brought because that Mexican cilantro has been contaminated with Cyclospora, a parasite which has caused the diarrheal illness known as cyclosporiasis for each of the past four seasons. U.S. Food and Drug Administration (FDA) and Mexican investigators have reported finding “deplorable conditions” at farms and packing houses in the Puebla area. 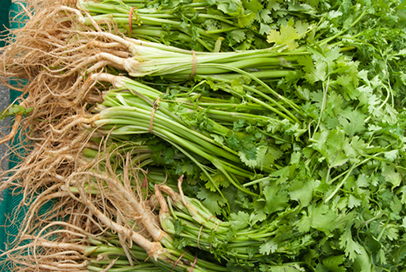 The 32-page complaint filed against Don Hugo quotes from the U.S.-Mexican findings about conditions that “included human feces and toilet paper found in the growing fields and around facilities, inadequately maintained and supplied toilet and hand washing facilities (i.e., no soap, no toilet paper, no running water, no paper towels) or a complete lack of toilet and hand washing facilities; food-contact surfaces (such as plastic crates used to transport cilantro or tables where cilantro was cut and bundled) visibly dirty and not washed; and water used for purposes such as washing cilantro vulnerable to contamination from sewage/septic systems.” Those findings led FDA to call for the Mexican cilantro being detained at the U.S. border without physical examination. Farmer’s Friend charges it was misled by Hugo Produce because it presented third-party audits that the cilantro grown on the farms outside Puebla, Mexico, was safe. It says those claims were “fraudulent and deceptive” and resulted in many U.S. consumers being sickened by the parasite and suffering cramping, vomiting, and diarrhea as a result, some requiring hospitalization. The federal lawsuit was filed in U.S. District Court for the Southern District of Texas in McAllen. The court’s jurisdiction stems in part from damages of $75,000 or more being sought in a dispute between parties from different states. Since about May 1, the single-celled parasite has caused intestinal infections in 495 Americans from 30 states. Cluster investigations in Texas and Wisconsin have specifically identified cilantro as the suspect vehicle. The 2015 outbreak is following a very similar pattern to each of the past three years when cilantro from the Puebla region of Mexico brought the parasites north of the border. Farmer’s Friend, represented by attorney Jason R. Klinowski of Wallace, Jordan, Ratliff & Brandt LLC in Birmingham, AL, states that it was provided with documentation in June 2014 showing that the farms in the Mexican states of Zacatecas and Aguascalientes were compliant with Global Good Agricultural Practices (GAP) standards for food safety. With those certifications, Farmer’s Friend agreed to buy cilantro from growers in Aguascalientes. It also received certificates from Mexico’s Secretariat of Agriculture, Livestock and Rural Development, Fisheries and Food for the cilantro farms. However, in 2015, Farmer’s Friend claims that Hugo Produce began selling them cilantro from unapproved farms in the State of Puebla, including 26 loads this past June and July. FDA issued the import alert on July 28, 2015, calling for “Detention Without Physical Examination of Fresh Cilantro from the State of Puebla, Mexico.” The alert identified cilantro from Puebla as the source of the cyclosporiasis outbreak in the U.S. and, according to the complaint, “identified fecal contamination of growing areas and poor hygienic practices of workers that harvest the produce as likely causes of the outbreak.” The Cyclospora parasite can only be seen with a microscope. It is spread when feces attach to food and water and are then consumed. Cyclospora infects the bowel and often results in explosive diarrhea, along with cramps, bloating, gas, and fatigue, in addition to vomiting, body aches, fever and other flu-like symptoms. Unless treated, it can take two months to recover. Farmer’s Friend is seeking triple damages based on multiple allegations, including gross negligence on behalf of Don Hugo.