“OMG. Not cantaloupes again.” That’s what many consumers are saying about the recent back-to-back news this summer. First it was an all-season recall, then a deadly foodborne illness outbreak, both linked to contaminated cantaloupes. It doesn’t help that the recall, which was triggered after Listeria was found in a North Carolina farm’s packing shed and on one of its melons, and the outbreak — likely caused by Salmonella found on cantaloupes from an unnamed farm in southwestern Indiana — follow last year’s outbreak caused by Listeria-contaminated cantaloupes from a growing region in Colorado. One of the most deadly outbreaks in U.S. history, it killed more than 30 people and sickened more than 140. Yet despite these recent events, U.S. consumers continue to buy these popular melons, with California, the big cheese in the industry, shipping out about 10 million pounds of cantaloupes each day. So the question for many comes down not to “Should I eat cantaloupes?” but rather “What food safety tips can I use when buying and preparing cantaloupes?” When in Doubt 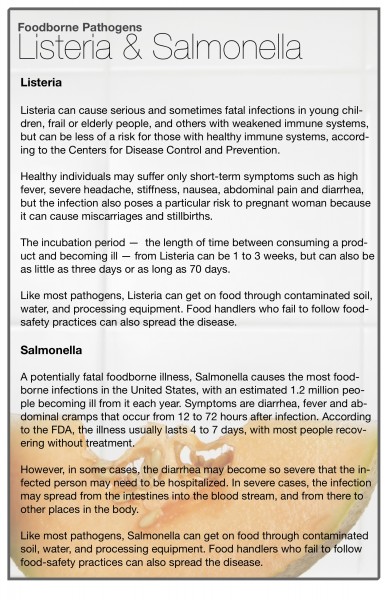 As a starter, consumers should not buy any cantaloupes from southwestern Indiana, since the farm that may have triggered the outbreak that killed two people in Kentucky and sickened at least 141 people across 20 states still remains unnamed as of August 21. Of course, that’s easier said than done because many times labels slip off the cantaloupes and also because many people outside of the region don’t know where southwestern Indiana is. Even so, many large retailers said either that they have taken any melons coming from that part of Indiana off their shelves or that they didn’t buy any from that growing area. The outbreak was announced on Aug. 17. Bottom line: it all comes down to this advice from the U.S. Centers for Disease Control and Prevention: “When in doubt, throw it out.” Meanwhile, Burch Farms in North Carolina — where investigators found Listeria in the packing shed — recalled all of its cantaloupes and honeydew melons earlier this month. It also agreed to extend the recall to its entire growing season. The cantaloupes and honeydew melons involved in this expanded recall were sold to distributors between June 23 and July 27 in several states, including: FL, GA, IL, KY, MA, MD, ME, MI, NC, NH, NJ, NY, OH, PA, SC, and VA, VT and WV. FDA said the melons may have been further distributed to retail stores, restaurants and food service facilities in other states. The agency typically does not post a list of retailers who received recalled products, as the U.S. Department of Agriculture often does. Again, as in the Salmonella outbreak, “When in doubt, throw it out.” The Big Cheese Last year’s Listeria outbreak caused by infected cantaloupes ripped through the industry, causing sales to plunge when many consumers decided it wasn’t worth the risk. That fiasco had California growers joining together to come up with a plan to ensure that cantaloupes from the Golden State are being grown, packed and shipped according to strict food-safety standards. In an unprecedented move, the state’s cantaloupe growers gave a 100 percent thumbs-up to a mandatory plan that requires them to follow government food-safety standards. Going one step further, they also voted in favor of contributing check-off funds levied on their cantaloupes to pay for the cost of California Food and Agriculture Department and USDA inspection audits. All of that even though California has never had a foodborne illness outbreak linked to whole cantaloupes. “We’ve had buyers calling us asking for our cantaloupes, because our state is recognized for the food-safety standards the growers are following,” said Stephen Patricio, president and CEO of Westside Produce in California and Chairman of the California Cantaloupe Advisory Board. What’s happening in California is important because the state supplies the nation with 80 percent of its cantaloupes during its main growing season and 60 percent annually. “California cantaloupes go everywhere,” said Patricio. Unfortunately, though, it’s hard to keep labels on cantaloupes due to the netting on the rind. Patricio said that consumers should ask the retailers where the cantaloupes they’re selling were grown. “It’s a law that the data must be available,” he said. “Don’t take ‘I don’t know’ for an answer. Ask them to go in the back (where fruit comes into the store) and look at the boxes to see where they’re from.” This past winter when an international conference focusing on food safety and cantaloupes was held in San Diego, many cantaloupe raisers in growing districts across the nation saw the wisdom of adopting a plan similar to California’s. But strangely enough, said Patricio, the two districts that indicated that the plan didn’t apply to them were the Southeastern and the Midwestern districts, the very two districts where the recent outbreak and recall occurred. What Is It With Cantaloupes? Trevor Suslow, Extension research specialist in food safety at UC Davis, is quick to say that the recent outbreak and recall aren’t “a cantaloupe problem” but rather “a handling problem.”