Federal officials have joined Maryland’s Health Department in a warning against eating yellow Maradol papayas because of Salmonella contamination, reporting one person has died and at least 46 others are sick in an ongoing outbreak that began in mid-May.

Additional victims are likely to be added to the case count because people who became ill after June 23 might not be reported yet because of the lag time between when a person becomes ill and when the illness is recorded by public health officials, according to the Centers for Disease Control and Prevention.

As of 8 p.m. Eastern time Friday no recalls had been posted by the Food and Drug Administration, but the agency is working with the CDC and state officials to investigate the source of the contamination.

The Friday afternoon outbreak investigation announcement from the CDC came on the heels of a Wednesday warning from public health officials in Maryland. The state’s warning specified Caribeña-brand yellow Maradol papayas, but the CDC did not reference brands.

“Salmonella Kiambu and Salmonella Thompson were isolated from samples collected from ill people,” according to the CDC outbreak announcement.

“The Maryland Department of Health collected papayas from the grocery store associated with the illness cluster to test for Salmonella. One sample yielded the outbreak strain of Salmonella Kiambu and another sample yielded Salmonella Thompson. Both samples were from yellow Maradol papayas.

The CDC used whole genome sequencing (WGS) to obtain the DNA fingerprints of the Salmonella strains, which showed the pathogens found on the papayas from the grocery store matched those that infected the outbreak victims.

Advice to consumers, restaurants, retailers
“Based on the available evidence, CDC recommends that consumers not eat, restaurants not serve, and retailers not sell yellow Maradol papayas until we learn more,” according to the outbreak notice. 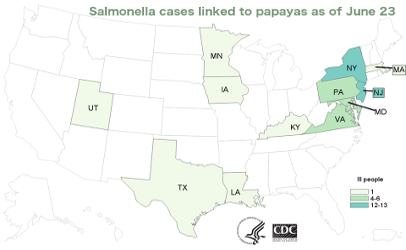 Outbreak details
As of July 21, 2017, 47 people infected with the outbreak strain of Salmonella Kiambu have been reported from 12 states.

Illnesses started on dates ranging from May 17 to June 28. Ill people range in age from less than 1 year to 95, with a median age of 27.

Among 33 people with available information, 12, or 36 percent reported being hospitalized. One death has been reported from New York City.

In interviews, ill people answered questions about the foods they ate and other exposures in the week before they became ill. Eleven, or 44 percent, of 25 people interviewed reported eating papayas.