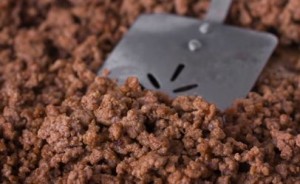 The government’s Agricultural Marketing Service’s (AMS) Commodity Procurement Staff purchases a variety of food products for use in the National School Lunch Program (NSLP) and other food assistance programs. One of these commodity items is frozen ground beef. All ground beef that is generated for the NSLP is further processed and cooked at other USDA establishments that are inspected by AMS inspectors. This ensures that the ground beef is cooked at an appropriate time and temperature, ensuring that any pathogens are eliminated. There are a number of stringent requirements that USDA-inspected establishments must meet in order to supply the U.S. government with their “excellent conditioned” ground beef. The most formidable of these requirements is the written Technical Proposal itself. If an establishment harvests (slaughters) livestock, further processes carcasses and then grinds the product, it would be a perfect fit. However, if a company is a further processor and grinder or just a grinder, it too can qualify. Plants that are vertically integrated (those that harvest, fabricate and grind) are an ideal fit for the NSLP because these establishments have the ability and skills to monitor the meat’s integrity via multi-hurdle pathogenic interventions during harvesting and de-boning (removal of objectionable materials such as silver skin, neck straps, tendons, etc.) more effectively than further processors. Companies that are only grinders have to rely on finding a qualified and approved outside boneless beef supplier / contractor and hope that that supplier’s HACCP (hazard analysis and critical control points) systems have robust pathogenic interventions that will ensure consistent microbiological acceptability of fresh and frozen boneless beef. The present 2012/2013 NSLP Technical Proposal design started back in 2002. The format is based on the ISO 9001 series. It requires that a company incorporate the plan, do, check and act format from the time a cow is euthanized through the entire continuum of harvesting, fabrication and grinding; leading up to and including the delivery of finished product to its final destination. When the product reaches its final destination, randomly selected shipping containers are checked by an AMS agent to ensure that the product is at 0 degrees F or lower. If it isn’t, the entire load is rejected and sent back to the sender. The company is then issued a non-compliance record that needs to be addressed and documented by the establishment within ten working days. In general, the NSLP is not a forgiving program. However, it does have its rewards. That is, when comparing the price per pound of commercial ground beef opposed to what the government pays – therein lies the incentive. The U.S. government wires compensation within 24 hours or less after final delivery is consummated. Listed below are some other general highlights of the NSLP criteria for ground beef for 2012/2013:

– The establishment must write a thoroughly detailed Technical Proposal that describes its unique operations   that must be germane to the NSLP and FSIS regulations regarding the product(s) it would like to supply the U.S. government.

– Once the Technical Proposal is written, it’s sent to Washington DC for approval.

– After the process of approval is finally granted, each company must then schedule what is known as a pre-award audit with an assigned AMS auditor. The audit usually takes one day and includes auditing human handling in the corrals, the harvesting floor, fabrication and grinding operations. The auditor shall also ensure that the company’s written Technical Proposal is accurate to what she/he observes during the audit. The auditor will also check the plants multiple HACCP, SSOP and Prerequisite programs for efficacy, including its food defense program, and will request a private conference with the establishment’s Inspector-In-Charge.

– Once the pre-award audit is passed, the establishment is registered on the government’s website with a series of codes that will enable the establishment to bid against other companies for governmental contracts. If a company harvests livestock, it must have a written humane handling program that is based on the American Meat Institute’s (AMI) 2010 Livestock Manual, which is co-authored by Dr. Temple Grandin and the AMI’s livestock committee members.

– An AMS auditor will then perform an audit of the company’s livestock program / operations twice a year, unannounced.  If the plant fails the humane handing audit, the company is automatically disqualified until it can provide evidence to USDA that it’s capable of passing a humane handling audit. That is, after the company responds to a critical non-compliance record, including future preventive measures. Yet another humane handling of livestock audit is performed before the disqualification status is lifted.

– In harvesting, the plant must swab one whole carcass (both halves) for E. coli O157:H7 every harvesting day. It must also have at least two or more pathogenic interventions, i.e. lactic acid spray or hot water pasteurization, that have been validated by a reputable third party laboratory within the last fiscal year and be able to evince a log reduction of 3 logs or more.

– In fabrication, each plant must perform N70 testing of each individual bin of boneless beef. Each individual bin is considered to be a lot. The sample sizes must be in conformance with FSIS Directive 10,010 Rev. 3. Each company is assigned an Assigned Designated Laboratory, (ADL) where the samples of boneless and ground beef are tested. Know that the AMS also audits these ADLs at least once a year, and that they must bid for their Government contract as well. NSLP combo bins must weigh at least 1850 lbs., and must never exceed 2250 lbs., with the last combo bin not exceeding10% of 2250 lbs.

– Each boneless beef sample must be taken from the surface of the carcass, which cannot be sprayed with an anti-bacterial spray 15 minutes prior to collecting samples. A total of 60 samples are tested for E. coli O157:H7, with the remaining 10 samples tested for Salmonella, generic E. coli, total plate count and E. coli coliform. In the event the product is positive for E. coli O157:H7 or Salmonella, the entire day’s production is rejected. For example, if you take individual N70 samples of each individual 40 combo bin and bin number 36 tests positive for E. coli O157:H7, all of the bins, 1 through 40, are rejected, unless the establishment can proffer scientific documentation / data on why the other 39 bins should still be included for the NSLP program.

– On the grinding end, the same pathogens and indicative organisms are tested with the same rejection rules as boneless beef. For every 10,000 pounds of ground beef generated, a composite sample is taken and collected by the establishment during the filling continuum of each sub-lot and picked up by an ADL courier on the same day or the next morning. All samples are held by the AMS agent in a locked, government sealed sub-zero freezer at the establishment until the ADL courier picks up the samples.

Every year, around May or June, a NSLP conference, put on by Livestock and Seed, is held in Kansas City, Missouri. It’s usually a two-day conference that delineates any changes for both new and existing suppliers. All establishments that were approved in 2012 must again re-submit a new 2013 Technical Proposal, (regardless if there are changes or not) before they are allowed to bid in 2013.