No cows needed for this milk. But we’re not taking about products such as almond milk or soy milk. We’re talking about actual milk complete with dairy proteins. But not a cow in sight.

How could this be?

No easy accomplishment for sure. It’s taken 15 years of research at Tel Aviv University, led by Imagindairy co-founder and chief science officer Tamir Tuller, to come up with this novel way of making milk based on animal-free proteins.

Although it hasn’t come out into the marketplace yet, Israel’s Imagindairy recently closed a $13 million seed round to commercialize cow-free milk proteins.

“The market is eager to develop new dairy analogs based on our animal-free proteins,” said Eyal Afergan, company co-founder and CEO, in a statement, referring to products that are equivalent to dairy products.

Turns out that instead of feeding cows, this new approach will involve feeding microorganisms that the scientists say are up to 20 times more efficient than a cow’s system in turning feed — hay and grain, for example — into human food.

Imagindairy does this by using what is called “precision fermentation” to create “true” milk proteins — including, in particular, casein and whey, two of the key compounds responsible for taste, texture and other properties of cow’s milk and its derivatives.

What’s going on here?
In fermentation, the power of microflora is tapped. These tiny microorganisms are busy fermenting things all around us — in the soil,  in plants, inside cows’ digestive systems and even inside of ours, where they help our bodies digest the food we eat.

Simply put, fermentation is the process in which a substance breaks down into a simpler substance. It’s what makes bread rise, yogurt thicken, and beer to fizz. In other words, it’s nothing new.

In the case of “precision fermentation,” scientists give these busy microflora the precise DNA sequence that provides a blueprint for making cow whey and casein proteins. Casein makes up 80 percent of the milk protein, while whey, which gives milk its flavor and texture, accounts for 20 percent.

Getting this specific DNA blueprint requires no involvement whatsoever on the part of a cow. Special software is what makes it possible.

The microflora is put into a tank filled with broth, which is made of water, nutrients and sugar. Because the microflora have the blueprints for making the two proteins, when they ferment the broth, they can make pure animal protein.

From there, the protein is separated from the microflora, filtered, purified and finally dried.

The company says what you get from all of this is a pure protein powder that can be used to make milk, cheese, yogurt, cream cheese and even ice cream — all of which are identical to the original dairy products.

“We integrate AI (artificial intelligence) technology with system biology to unlock the potential of cellular agriculture,” says the company’s website.

The environment and ethics
On the environmental front, Imagindairy says it can avoid many of the environmental problems, including greenhouse gas emissions, associated with traditional dairy cattle production. It also says that its microorganisms are up to 20 times more efficient than cows at converting feedstock into human food.

Then, too, there’s the ethical part of the equation, which is also important to many consumers.

“Ethical claim is one of the key drivers of our innovative solution” said Eyal Afergan, co-founder and CEO. “Consumers want the sensation of real milk, but at the same time, they don’t want to harm the animals. Our vision is to enable every dairy lover worldwide to enjoy tasty and nutritious dairy products while preserving the environment and protecting animals. Together, we can create a world where a dairy cow is just a cow nurturing her calf.”

The company expects its product to be available on the market in two years.

Along similar lines, another company, Perfect Day — with regulatory approval for a new animal-free milk protein — developed its first product, ice cream, in 2019.  Since then, a growing catalog of brands and products are using Perfect Day’s animal-free protein from flora to make their products.

“We just get there in a different, kinder way,” says “Perfect Day’s” website.

”To maximize the amount of protein we can produce, and for the most sustainable process possible, we grow our microflora in large tanks at the optimal temperature, pH, and salinity following standard fermentation practices in the food industry,” said the spokesperson in an email to Food Safety News.

“The production of proteins for food via fermentation has been utilized for over 30 years, and Perfect Day’s process uses thoroughly vetted and well-established food safety systems and practices under
HACCP/HARPC, as well as third party-certified ISO-compliant food safety programs.”

Now what?
This new technology has the potential to usher in a host of significant changes in agriculture — changes that were not foreseen by most people and policymakers even just five years ago.

“We are on the cusp of the deepest, fastest, most consequential disruption in food and agricultural production since the first domestication of plants and animals ten thousand years ago,” says the executive summary of a report by ReThinkx.

“The impact of this disruption on industrial animal farming will be profound.

“By 2030, the number of cows in the U.S. will have fallen by 50 percent and the cattle farming industry will be all but bankrupt. All other livestock industries will suffer a similar fate, while the knock-on effects for crop farmers and businesses throughout the value chain will be severe.”

ReThinkx is an independent think tank that analyzes and forecasts the scope, speed and scale of technology-driven disruption and its implications across society. 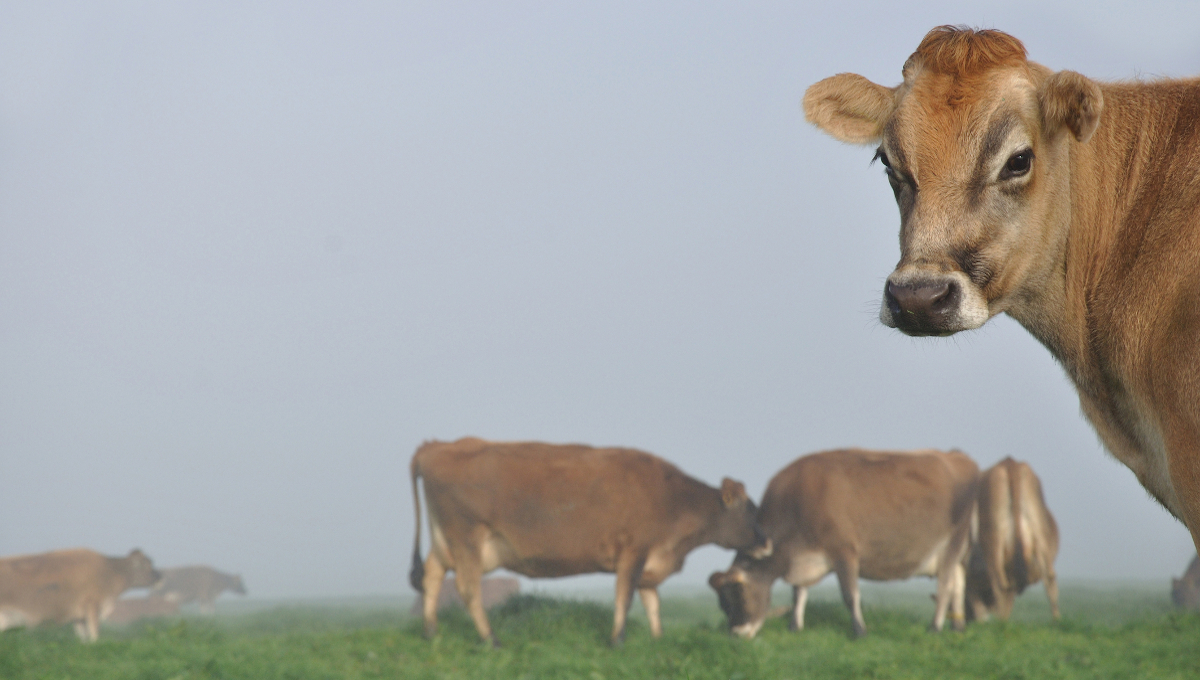 Back on the farm
Fourth-generation Oregon dairyman Jon Bansen, a spokesman for Organic Valley, a nationwide co-op, isn’t surprised by this sort of talk. He says that a large part of the reason that these companies are working on producing what could be called “lab milk” comes down to money.

“They see an opening and they want to get into it,” he said, referring to beliefs on the part of  some modern-day consumers that agriculture is ‘cruel and environmentally harmful.’

“Unfortunately, many people in this new generation are equating all of agriculture with agribusiness,” he said. “They’ve never been on a farm. They’re so decoupled from the natural world that they wouldn’t know what good food is. They have no understanding of it.  Agribusiness is taking us away from how food should be produced.”

In contrast to the cows in large confinement dairies, his dairy’s 175 cows are out in the fresh air grazing on green grass and producing nutrient-dense milk, he says.

Explaining that the many nutrients in the plants the cows are eating come from their interaction with the soil, he said that that’s why you need to farm as close to the soil as possible.

“You won’t get that from lab milk, he said.

Referring to agribusiness and megadairies, he laments that they’ve been abusing the soil for too long.

As an organic farmer, he uses non-toxic pesticides, no chemical fertilizers, no antibiotics, no added hormones, and no genetically modified organisms (GMOs). The cows must also be out on pasture, which must be organic, for a specific amount of time each year. And they must be treated humanely.

Go here to see a video of Bansen on his farm, Double J Jerseys.

More on food safety
Bansen said that the chances of milk from healthy cows being infected  with foodborne pathogens such as E. coli are just about zero, as long as the proper sanitary practices are followed.

“Healthy animals — that’s where it starts,” he said. “When a cow is eating the grasses and other plants in a pasture, that’s what they’re supposed to be eating. That’s what makes them healthy.”

His dairy must meet state requirements for a Class A dairy, which involves inspections and testing of the dairy’s milk, which is  pasteurized. Pasteurization is a heat-treatment process that destroys pathogenic microorganisms.