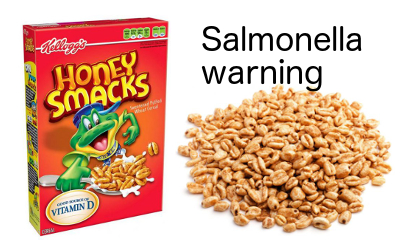 Some retailers are still selling recalled Kellogg’s Honey Smacks responsible for an expanding nationwide Salmonella outbreak, spurring the FDA to once again urge consumers to not buy or eat the cereal.

Investigators have laboratory confirmation that the outbreak strain of Salmonella Mbandaka is in the manufacturing facility and in unopened packages of the cereal. As of June 12, the food manufacturer — which Kellogg’s hired to make the Honey Smacks — stopped producing the product.

Food and Drug Administration officials reminded retailers that it against federal law to sell recalled food. The federal agency urges consumers to report any product being offered for sale to the FDA Consumer Complaint Coordinator in their region.

The FDA it is continuing to work with the firm to address corrective actions, according to its June 12 update.

“The FDA has learned that some retailers are still selling this product. The FDA will continue to monitor this situation closely and follow up with retailers as we become aware of recalled products being offered for sale.”

Meanwhile, the number of sick people continues to increase.

One hundred people are confirmed with infections from Salmonella Mbandaka, with 30 having been admitted to hospitals, according to the Centers for Disease and Prevention. The sick people are spread across 33 states. That’s 19 more states that CDC reported in its June 14 update.

The agency is urging consumers to check their homes for the recalled Kellogg’s Honey Smacks. Updates from the CDC and FDA say Honey Smacks of all package sizes and best-by dates should be thrown out.

“Even if some of the cereal has been eaten and no one got sick, throw the rest of it away or return it for a refund,” the CDC advised. “If you store cereal that looks like Kellogg’s Honey Smacks in a container without the packaging and doesn’t remember the brand or type, throw it away. Thoroughly wash the container with warm, soapy water before using it again, to remove harmful germs that could contaminate other food.”

The CDC reports that the first known victim became sick on March 3. The most recent person to become sick had symptoms begin July 2.

“Fifty-five (85 percent) of 65 people interviewed reported eating cold cereal. In interviews, 43 people specifically reported eating Kellogg’s Honey Smacks cereal. Ill people in this outbreak reported this cereal more often than any other cereals or food items,” according to the CDC.

“Ill people range in age from less than one year to 95, with a median age of 57. … Illnesses that occurred after June 19, 2018, might not yet be reported due to the time it takes between when a person becomes ill and when their illness is reported. This takes an average of 2 to 4 weeks.”

Public health officials have renewed their advice to consumers who have eaten of handled the recalled Honey Smacks to seek medical attention if they develop symptoms of Salmonella infection immediately. Sick people should tell their doctors about their possible exposure to Salmonella because special lab tests are required to properly diagnose the infections.

Symptoms usually begin within a week after exposure to the bacteria. Most people infected with Salmonella develop diarrhea, fever, and abdominal cramps. In otherwise healthy adults, Salmonella infections usually last four to seven days. However, people in high-risk groups, which include children, older adults, pregnant women and anyone with a compromised immune system can develop serious complications which require hospitalization.