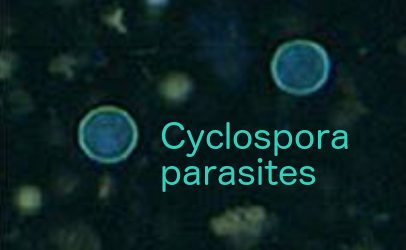 At least 400 people have been infected by Cyclospora parasites in two separate outbreaks associated with vegetable-dip trays from Del Monte and salads from McDonald’s.

There isn’t any evidence to indicate the two multi-state outbreaks are related, according to the Food and Drug Administration and the Centers for Disease Control and Prevention.

Victim counts are expected to continue to increase, partly because it can take up two weeks or longer for infected people to develop symptoms. There is also lag time of up to six weeks in cyclosporiasis cases between when a person is initially diagnosed and when lab-confirmation of their illnesses is reported to the CDC.

Consequently, people who became sick after June 7 may not yet be included in the federal agency’s case count for either outbreak.

Although there is strong epidemiological evidence that the salads and vegetable trays are the source of the Cyclospora, FDA officials reported this week that they have not yet identified a specific ingredient in any of the products that is the source of the parasitic contamination.

In recent years there have been a number of outbreaks caused by Cyclospora parasites. Most have been traced to fresh produce that was not cooked before it was consumed.

Federal officials said they have not received any reports of confirmed deaths in either outbreak. McDonald’s salads
At least three people sickened in the outbreak associated with salads from McDonald’s had such severe symptoms they had to be hospitalized. The 163 victims have illness onset dates beginning on or after May 1 through July 10.

The infected people range in age from 16 to 87 years old. Two-thirds of them are female, according to the CDC.

State health officials in 10 states have confirmed people with infections. However, the one sick person reported by Florida officials ate a McDonald’s salad from a restaurant in Kentucky.

“Anyone who consumed salads from McDonald’s in Iowa, Illinois, Kentucky, Minnesota, Missouri, Nebraska, Ohio, South Dakota and Wisconsin could have been exposed to the pathogen,” according to the FDA’s investigation update.

“The FDA is working with McDonald’s to identify the common ingredients in the salads identified by those who became sick and to trace back those ingredients through the supply chain.”

The multi-national restaurant chain pulled “lettuce blends” from about 3,000 stores in 14 states, according to a statement on the corporate website. Of the 3,000 restaurants, at least one is located in the following states: Illinois, Iowa, Indiana, Wisconsin, Michigan, Ohio, Minnesota, Nebraska, South Dakota, Montana, North Dakota, Kentucky, West Virginia and Missouri.

Del Monte vegetable-dip trays
Of the 237 people with laboratory-confirmed infections in the outbreak associated with Del Monte pre-cut vegetable trays, seven have had symptoms so severe that they had to be hospitalized, according to the CDC.

Illness onset dates in the outbreak range from May 14 through June 13. The sick people are 13 to 79 years old. Fifty-three percent of the confirmed ill people are female.

Advice to consumers
Anyone who has eaten a McDonald’s salad or any items from the recalled Del Monte vegetable-dip trays and developed symptoms of cyclosporiasis should seek medical attention and tell their doctors about their possible exposure to Cyclospora parasites.

“The Cyclospora parasite needs time — days to weeks — after being passed in a bowel movement to become infectious for another person,” according to the FDA. “Therefore, it is unlikely that cyclosporiasis is passed directly from one person to another.”