Healthy eating enthusiasts may want to reconsider their protein powder choices in light of a new study that shows 40 percent of 134 brands tested have elevated levels of heavy metals, with certified organic products twice as likely to contain heavy metals as non-organic powders.

The 2018 study by the Denver-based Clean Label Project used the independent analytical chemistry laboratory Ellipse Analytics to test the animal- and plant-based protein powders. Clean Label selected and purchased the powders from retail store shelves and from online sources.

In addition to heavy metals, the research project included testing for BPA, a known endocrine disruptor. Results showed 55 percent of powders tested had measurable levels of BPA. Of the 134 tested powders, 28 contained twice the regulatory limit of 3 micrograms of BPA. One contained more than 25 times the allowed level of BPA in just one serving.

The specific products tested in the Clean Label study are ranked the top sellers, according to statistics from Nielsen and the Amazon.com best-seller list. According to the research report released today, of the 134 products tested, 53 were found to have “substantially elevated” levels of the following heavy metals. 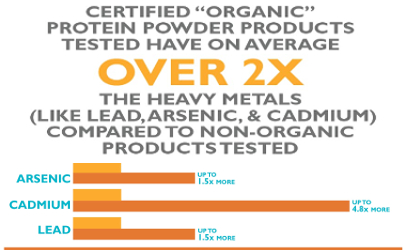 In addition to finding that the products certified organic by the U.S. Department of Agriculture are twice as likely to contain high levels of heavy metals as non-organic protein powders, the study found other surprising statistics about plant-based protein powders.

Clean Label Project Director Jackie Bowen said the toxins found in the plant products could put people who follow vegetarian diets at heightened risk of health issues if they are regularly consuming the plant-based powders. The powders had, on average, twice the amount of lead per serving of other products.

The director of operations and quality at the testing laboratory Ellipse Analytics said there could be several explanations as to why the powders have excessive levels of heavy metals.

“This could be due to the locations where the protein powder manufacturers’ plant ingredients are sourced having contaminated soil. This is especially true in the United States where there may be a higher incidence of heavy metals in the soil of some regions.” Good news coming out of the research was the finding that no egg-based protein powders tested contained lead.

The study data was analyzed by Clean Label Project’s Technical Advisory Board of statisticians, epidemiologists, food safety scientists and registered dietitians before being published. The study is in process of being peer-reviewed.

Study results on the nonprofit’s website are presented in a five-star rating system that names each product tested and shows how contaminated it is compared to other products in the same study. More than 40 of the products tested only received one star.