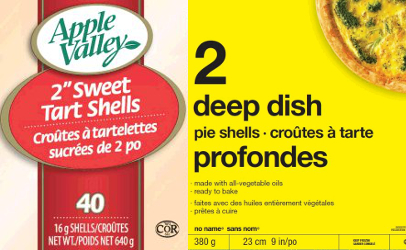 Another food recall in Canada is underway in the midst of an E. coli outbreak as several brands of pie and tart shells made with flour linked to 28 illnesses are being pulled from retailers across the country.

Harlan Bakeries of Edmonton and the Canadian Food Inspection Agency are warning consumers to check their homes for the recalled products, according to the recall notice posted on the CFIA’s website. Products included in the Harlan Bakeries recall include Great Value and other brands listed here:

“Recalled products should be thrown out or returned to the store where they were purchased,” according to the recall. “It is not safe to taste or eat raw dough or batter regardless of the type of flour used, as raw flour can be contaminated with harmful bacteria such as E. coli O121. Food contaminated with E. coli O121 may not look or smell spoiled but can still make you sick.”

Anyone who has eaten any of the recalled products and developed symptoms of E. coli infection should seek medical attention and tell their doctors about the possible exposure to the pathogen so the proper diagnostic tests can be performed. The Public Health Agency of Canada has confirmed 27 cases of E. coli O121 infections across five Canadian provinces since November 2016 that have been linked to flour produced by Ardent Mills Canada. A 28th victim was a visitor to the country.

Seven of the outbreak victims were hospitalized, but are recovering. No deaths have been reported in relation to the outbreak.

The previous recalls of the implicated flour and products made with it are: