UPDATE: 9:50 p.m. EST, March 10, 2017 — The recall in Canada has been expanded to include additional flavors of I.M. Healthy brand soy nut butters. No illnesses in Canada have been linked to the I.M. Healthy brand products from the SoyNut Butter Co., according to the Thursday recall notice from the Canadian Food Inspection Agency.

In the United States, 16 people across nine states have been confirmed with the outbreak strain that Oregon officials detected in a jar of the soy nut butter collected from the home of two children sickened by E. coli O157:H7 infections.

Fourteen of the victims are children. Eight of the victims have required hospitalization and five have developed the potentially deadly hemolytic uremic syndrome (HUS), which attacks the kidneys.

Anyone who has eaten I.M. Healthy brand SoyNut Butter products or anything containing the products and developed symptoms of E. coli infection should immediately seek medical attention and tell their doctors about the possible exposure to the bacteria.

“The symptoms of STEC infections vary but often include severe stomach cramps, diarrhea — often bloody — and vomiting,” according to the U.S. Centers for Disease Control and Prevention. 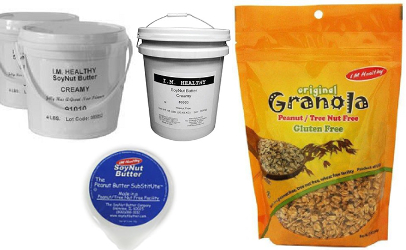 Label information for the recalled I.M. Healthy products in Canada is as follows:

The recall was expanded to include additional I.M. Healthy brand soy butters. Details are available on the CFIA website.

As of Thursday the manufacturer of the contaminated soy nut butter remained a secret. Officials with the SoyNut Butter Co. have not responded to requests for comment.

There is concern that the contract manufacturer used by SoyNut Butter Co. may have sold contaminated soy butter to other companies for use in products sold under brands other than I.M. Healthy.

The U.S. Food and Drug Administration is gagged by federal law from releasing  “confidential corporate information” such as the identity of the contract manufacturer.

For additional details on the outbreak and recall, please see: