A slaughterhouse-meat processing business in Auburn, WA, that lost its license two years ago because of food safety violations is still operating and now under court order to cease operations. 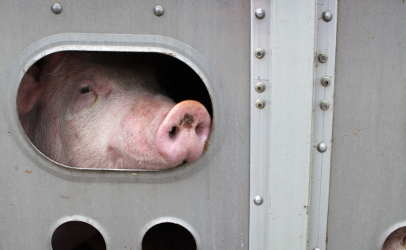 Rickson Vilog, owner of Vilog Livestock, is under orders from King County Superior Court Judge Brian Gain to remove all livestock from his property by Dec. 22 or face fines of $100 per day, per animal, according to a news release from the Washington State Department of Agriculture.

“In addition, he cannot acquire any new livestock, slaughter any animals or process any meat until he obtains the appropriate licenses from WSDA,” according to the release.

“Customers are advised that they should not purchase slaughter or butcher services from Vilog Livestock as the business does not currently have a license to operate and is in violation of numerous food sanitation regulations.”

State agriculture officials first cited Vilog in 2011 for violations that included lacking an approved sewage and waste disposal system, unclean facilities and equipment, and unsanitary food processing practices. Vilog has failed every inspection since then, according to the agriculture department.

After receiving notification in 2014 that his license was in jeopardy, Vilog agreed to make sanitation improvements, but did not follow through with them, according to state officials. They revoked his license in November 2014. and fined him $6,000.

“Follow-up visits found Vilog continued to operate. (The agriculture department) has filed several motions in court to enforce its rule, including two previous contempt motions because Vilog continued to slaughter livestock and process meat without a license.

“At a Dec. 7 hearing, (the department) demonstrated Vilog had failed to comply with court orders.”

State officials estimate Zilog may have slaughtered and processed at least 500 animals just since summer. In 2014 they reported his operation was slaughtering goats, sheep, swine and cattle.