“This is way more than usual, which is why we started doing the investigation. We hit clusters of Salmonella, especially in the summertime, but we started seeing dozens and that’s when we started doing questionnaires to identify a common source,” said Colleen Bridger, director of the Orange County Health Department in Chapel Hill. Bridger said not all of the 50-plus in-state cases have been interviewed, but the “vast majority” of those who have recalled eating cheese from the Chapel Hill Creamery. “We’ve been monitoring the Salmonella cases for about three weeks and started doing questionnaires about a week ago, and it was just yesterday that we felt we had enough information to say this is probably the Chapel Hill Creamery. We didn’t want to make the declaration until we were sure,” she added. The products being recalled include all codes, packages and sizes of 14 varieties of cheese manufactured by the Chapel Hill Creamery and distributed through retail locations, farmers markets and restaurants throughout North Carolina, Tennessee, South Carolina, Virginia and Georgia. The cheese varieties are: Quark, Danziger, Swiss, Paneer, Calvander, Hot Farmers Cheese, Dairyland Farmers Cheese, Smoked Mozzarella, Fresh Mozzarella, Burrata, Hickory Grove, Carolina Moon, Smoked Farmers Cheese, New Moon, and Pheta. “Although there is not yet a definitive link between the CHC cheese and the illnesses, there is enough evidence to implicate the cheese and we are asking customers to not consume these cheeses or use them in food service,” said Portia McKnight, Creamery co-founder. Chapel Hill Creamery has asked its wholesale customers to remove any CHC cheese from their shelves and dispose of it. Consumers who have this product in their home should not consume it and should throw it away. Customers are also being reminded to thoroughly wash their hands and any utensils or equipment that may have contacted the cheese in warm, soapy water. Chapel Hill Creamery is working in cooperation with the North Carolina Department of Agriculture, North Carolina Department of Health and Human Services, and the Orange County Health Department to identify the source of the Salmonella and which of its cheeses are affected. The Creamery plans to provide updated information on its website as it becomes available. 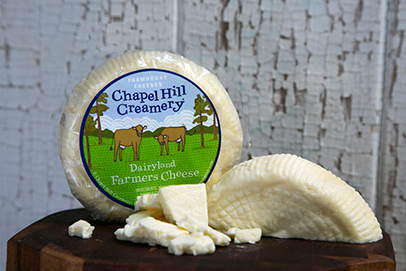 Bridger noted that some of the Creamery’s cheese products are made with raw milk and some are not. She also said it was the first such incident she knows of involving the local business. The U.S. Centers for Disease Control and Prevention (CDC) is aware of the outbreak and has been assisting the other states, Bridger said, while North Carolina state and local health officials are coordinating on their part of the investigation. “We’re working with public health and with agriculture to try and figure out what the next step is to make sure we’ve resolved the problem and that they can resume production and selling their cheese again,” she said. Orange County has provided a hotline at (919) 245-2378 for anyone in North Carolina who has questions about the outbreak. Most persons infected with Salmonella experience fever, diarrhea, nausea, vomiting and abdominal pain. People who are concerned they might have Salmonella infections should contact their doctor to discuss testing and treatment. The illness typically lasts four to seven days, and most people recover without treatment. However, in some people, the diarrhea may be so severe that the patient needs to be hospitalized. More information on Salmonella is available here and here.