UPDATE: According to a statement posted Thursday by the Alabama Department of Public Health, “presumptive Salmonella gastroenteritis” caused at least 77 people to become sickened and 12 to be hospitalized following a private event in Colbert County this past Saturday.

All patients are recovering from what was described as vomiting, diarrhea, stomach pain and some fever, according to the statement.

“The laboratory has reported that initial patient specimens tested presumptive positive for Salmonella. Food results are pending as it takes longer to process food specimens,” the statement noted.

The caterer, which has been reported as Indelible Catering of Moulton, AL, is cooperating with the health department and is no longer preparing food, according to the statement.

“The health department’s priorities are the health of the patients, a thorough investigation, and preventing any additional illness,” said Dr. Karen Landers, assistant state health officer. “This was a private event with exposure to the food over a specific time period. Therefore, there is no threat to the general public.”

Previous coverage follows:
Public health officials in northern Alabama are working to track down the source of a foodborne illness that has caused at least 40 people to seek medical attention and six to be hospitalized since Saturday night.

According to the Alabama Department of Public Health, officials started investigating the situation on Monday after reports emerged that a number of people had experienced bouts of diarrhea, vomiting, fever and abdominal pain following a weekend event in Sheffield, AL, near Muscle Shoals. 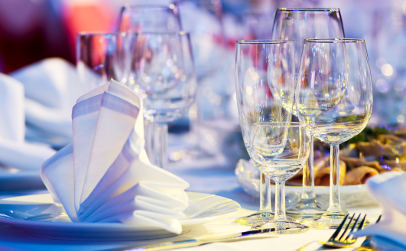 “Currently we have about 40 people reported ill, although we expect that number to change. We have six hospitalized, and that may change, and probably will change, depending on how individual patients respond,” said Dr. Karen Landers, assistant state health officer.

Speculation was that contaminated food served at a catered affair in Colbert County may have been the source of the problem, although health officials were not sharing details about the venue, the caterer, or the food items involved.

“This was a private, catered event, and there were 150 people who attended,” Landers told Food Safety News.

Local news reports indicated the event was a hotel wedding reception in the Shoals region, and a story published Wednesday by The TimesDaily of Florence, AL, reported the source of the reception food as Indelible Catering.

Food samples and patient stool samples are currently being analyzed in the state laboratory, and preliminary results could be available by Thursday, Landers said.

“We have a menu (from the event), and it is appropriate to check the entire menu and what patients ingested. We should not focus on one food agent,” she said.

Landers would not speculate about whether the source of the problem is Salmonella, as some Alabama media outlets have reported.

“Many things can cause foodborne illness,” she said. “What I will say is once we have laboratory confirmation, we will provide more information. Our concern is for the patients, and that is being done, and we have mitigated or stopped any risk to the general public.”

The TimesDaily noted that the same catering firm provided food for a luncheon in 2014 in Decatur, AL, after which at least 19 people reported becoming ill. One of them died.

Several of those sickened were later confirmed as having E. coli and Salmonella infections. However, none of the food prepared for that 2014 luncheon by Indelible Catering was ever definitively linked to the reported illnesses.