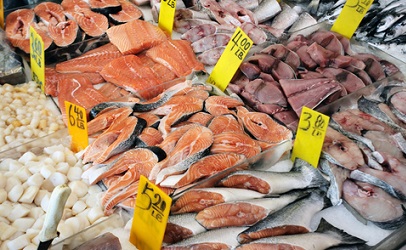 A large number of fish imported from China and Vietnam and sold in at least some U.S. supermarkets contain unnatural levels of formaldehyde, a known carcinogen, according to tests performed and verified by researchers at a North Carolina chemical engineering firm and North Carolina State University. Around 25 percent of all the fish purchased from supermarkets by researchers in the Raleigh, N.C., area were found to contain formaldehyde, a toxic chemical compound commonly used as a medical disinfectant or embalming agent. All of the fish found to contain the compound were imported from Asian countries, and it was not found in fish from the U.S. or other regions. The researchers only collected samples from supermarkets around Raleigh, N.C., and could not comment on whether or not the same results could be applied to fish sold nationwide. Formaldehyde is illegal in food beyond any naturally occurring trace amounts. But, according to chemical engineer A. James Attar and his colleagues who conducted the tests, the U.S. Food and Drug Administration does not test any imported fish for formaldehyde contamination, and only 4 percent of imported fish gets tested for any contaminants at all. “The look on my face when we found this – it was a complete shocker,” said Jason Morton, Attar’s colleague at N.C.-based Appealing Products, Inc. Attar, Morton and another colleague at Appealing Products, Matthew Schwartz, came across the alarming revelation when they set out to validate a new formaldehyde test they developed for Bangladeshi clients who needed a cheap way to detect contaminated fish. To verify the accuracy of their test, the team purchased domestic and imported fish from supermarkets around Raleigh, NC, with the intent of purposefully contaminating them with formaldehyde and then verifying that their test worked. Instead, they found that about one in four fish was already contaminated with formaldehyde. The commonality between all the contaminated fish? They were imported from Asian countries, predominantly China and Vietnam. Not all of the Asian fish were contaminated, but many were, Attar said. The FDA has not had the opportunity to analyze the fish samples tested by Appealing Products, nor has the agency had the opportunity to review the test methods utilized. “The FDA’s priority is to ensure that both domestic and imported seafood is safe and that we are protecting consumers from products that can cause illness,” the agency told Food Safety News. “To accomplish this, FDA oversees a comprehensive food safety program designed to ensure the safety of all seafood sold in the United States. This prevention-oriented program includes risk based inspections, product testing, and assessments of foreign countries regulation of aquaculture facilities.” All foods imports entering the U.S. are screened electronically by the FDA. A subset of those foods are physically inspected at rates based on the potential risk associated with them, with some samples undergoing lab analysis. “FDA encourages anyone who has evidence that an FDA regulated product violates food safety laws and regulations to contact FDA,” the agency added. Attar and Morton stopped short of accusing Asian fish companies of intentionally adding formaldehyde to fish to prevent spoilage, though it appears to be a common problem in Bangladesh, where formaldehyde might preserve fish when refrigerators or ice aren’t available. (Think of frogs preserved for dissection in a high-school science lab.) Attar and his team first uncovered the issue in February 2013, and then spent six months routinely testing samples, finding the same results. Their results were then verified by researchers at North Carolina State. Attar said the sampling was restricted to purchases from Raleigh only and might not reflect fish in supermarkets nationwide. “But, empirically, this is what we found,” he added. Formaldehyde is present in some fish at small, naturally occurring levels. But everything observed in the Asian fish found that they were contaminated with far higher-than-normal or acceptable levels, Attar said. The team tested whether or not levels of formaldehyde increased in cuts of fish as they aged, but the levels remained the same. They also tested the same species harvested from both Chinese and U.S. companies, finding that the Chinese-caught fish contained formaldehyde, while the U.S.-caught fish of the same species did not. According to the National Oceanic and Atmospheric Association, the U.S. imports approximately 91 percent of its seafood. China alone accounts for approximately 89 percent of global aquaculture production. Appealing Products’ formaldehyde test costs approximately $1 per swab, which is applied to a cut of fish and turns purple in the presence of formaldehyde. The company has shipped 100,000 tests to Bangladesh and anticipates orders from companies in other Asian countries. More information on the tests can be found at formaldehydetests.com. Documented instances of intentional formaldehyde contamination of food have occurred in China, Vietnam, Indonesia and Thailand. Attar and Morton said that their evidence makes a strong case for improved testing on seafood imports in the U.S., especially from Asian countries. “I cannot say that companies are adding formaldehyde to fish, but our findings are higher than what naturally occurs,” Morton said.