Thirteen people in seven states are infected with an outbreak strain of Salmonella Newport, the federal Centers for Disease Control and Prevention in Atlanta reported Tuesday. Raw, ground tuna is believed to be the source of the infections.

North Dakota and Washington State each reported four cases.   Connecticut, Iowa, Illinois, Minnesota and New York each had one case.

The U.S. Food and Drug Administration (FDA), and health and regulatory officials in the several states are investigating the Salmonella Newport outbreak along with CDC.

People infected with the outbreak strain ofÂ SalmonellaNewport, by state of residence, as of April 15, 2019 (n=13) 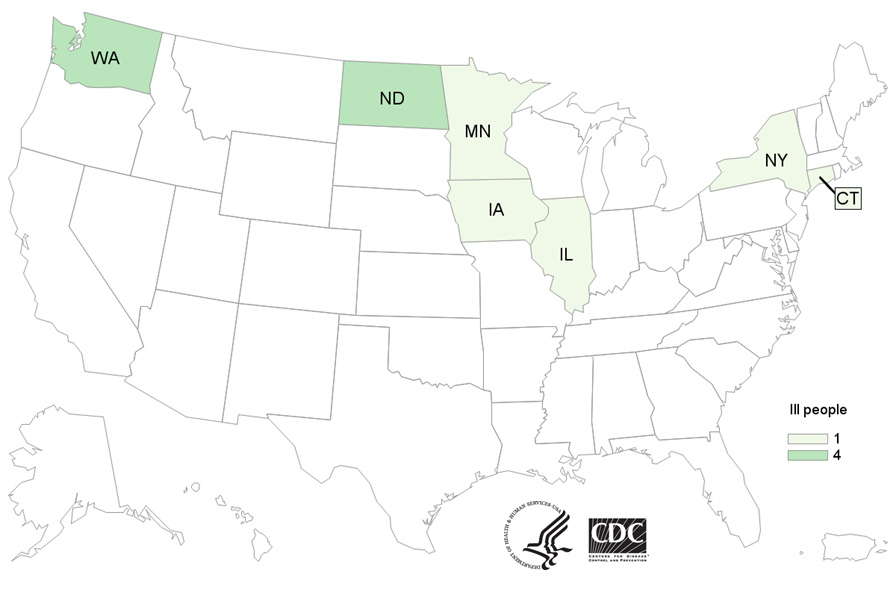 CDC estimates Salmonella causes about 1.2 million illnesses, 23,000 hospitalizations, and 450 deaths in the United States every year. Food is the source for about 1 million of these illnesses.

The illnesses and number of states were involved in the new outbreak as of April 15, 2019, according to the CDC. Illnesses started on dates ranging from January 8, 2019, to March 20, 2019. Ill people range in age from 29 to 85 years, with a median age of 40. Fifty-four percent are female. Of 12 people with available information, two (17 percent) have been hospitalized. No deaths have been reported.

Epidemiologic and traceback evidence indicates that frozen, fresh ground tuna supplied by Jensen Tuna in Houma, Louisiana is the likely source of this outbreak.

In interviews, ill people answered questions about the foods they ate and other exposures in the week before they became sick. Nine (75 percent) of 12 people interviewed reported eating sushi from a restaurant or grocery store. This proportion was significantly higher than results from a survey of healthy people in which 5 percent reported eating sushi, sashimi, or ceviche made with raw fish or shellfish in the week before they were interviewed. Of the nine people with information about their sushi exposure, nine (100 percent) reported eating a sushi item containing raw tuna or raw “spicy tuna.”

The FDA and regulatory officials in several states traced the source of the raw tuna used by restaurants where ill people ate sushi. The traceback evidence indicated that the restaurants used frozen ground tuna supplied by Jensen Tuna.