For the second time in less than a year a fish tank in a grocery store is believed to be the source of infection in Seattle, this time requiring a man to be hospitalized.

On Tuesday Seattle-King County Public Health reported that a King County resident who cut his hand while preparing fresh fish from a grocery store tank had been hospitalized with an infection from Vibrio vulnificus bacteria. A live fish tank at a Seattle Supermarket at 4801 Beacon Ave S is believed to be the source of the infection, but the investigation is ongoing.

The King County man, who is in his 40s, remained hospitalized Thursday. 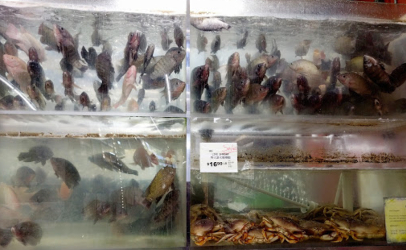 “His infection likely resulted while he was preparing the fish and cut his hand, which allowed the bacteria from the fish to enter and infect the wound. He and his wife also ate the cooked fish. His wife became ill, but she was not hospitalized,” according to the county health alert.

Public Health Officer Jeff Duchin said the risk to others appears limited at this point, but urged caution when preparing and eating fish from live tanks.

“This is the second case of this illness in the past year and both cases came from preparing and consuming fish purchased from a live fish tank. If you prepared or consumed fish of any kind, contact your healthcare provider if you develop signs of skin infection, fever, chills, or diarrhea in the seven days after contact with the fish,” Duchin said in the health alert.

“At this time, there is no known risk for people who have not been in contact with fish from this location, but people should always take precautions when handling raw seafood.”

The other victim of Vibrio infection Duchin referenced was a King County woman who purchased and prepared tilapia from a live tank at a different store. She contracted the infection in November of 2016, and has since recovered.

Public health is testing samples from fish and the fish tanks at the Seattle Supermarket.

“The investigation focuses on fish from the live fish tanks, but (health officials) are also looking into the possibility that other seafood may have been contaminated.”

The Seattle Supermarket threw out all fish that were processed at the facility, and the tanks and other equipment were decommissioned to be thoroughly cleaned and disinfected, according to the health department.

If you develop signs of infection, contact your doctor and tell them if you have been in handled raw seafood or eaten raw or undercooked seafood. If you ate or handled fish from the Seattle Supermarket location and have no illness after seven days, your risk of infection is low.

Certain people are at higher risk for Vibrio vulnificus infection. These include: To prevent chances of Vibrio infection, public health officials suggest consumers use gloves while handling raw seafood. Do not handle raw seafood if you have wounds on your hands or fingers. Wash your hands after handling raw shellfish and other types of seafood. Wash cuts or other wounds thoroughly with soap and water if you have handled raw seafood or come in contact with seawater. Do not eat raw or undercooked shellfish. Cooking shellfish and other seafood kills Vibrio bacteria.

Vibrio are a type of bacteria that are naturally occurring in seawater. There are many types of Vibrio that cause illness in humans. Vibrio vulnificus is very rare in the Pacific Northwest. It is more common in areas with warmer seawater, like the Gulf of Mexico.