An E. coli outbreak linked to peanut butter substitute I.M. Healthy brand soy nut butter has spread to nine states and the SoyNut Butter Co. has revealed it uses a contract manufacturer, meaning the implicated soy nut butter could have been used in other companies’ products under other brands.

No one from the Glenview, IL, company has responded to requests for comment, but after expanding its recall Tuesday to include all of its I.M. Healthy soy nut butter products — including granola — the SoyNut Butter Co. posted an apology to customers on its website and referenced the unnamed contract manufacturer.

“For over 20 years, the SoyNut Butter Co. has tried to make nut free products that help those with allergies eat like everyone else. Likewise, we chose our contract manufacturer because of their integrity and knowledge of food safety and quality. Unfortunately, we feel that is better to be cautious regarding public safety and urge our customers to heed the expanded recall. We have enjoyed serving you and will do everything we can possibly do to assist the FDA in this outbreak,” according to the SoyNut Butter Co. website.

The Food and Drug Administration is investigating the situation with the Centers for Disease Control and Prevention and state agencies across the country. With a contract manufacturer involved, there is a chance that contaminated soy nut butter has been used by other companies for products packaged under other brands.

A CDC spokeswoman said Tuesday that the agency is not aware of illnesses linked to any products other than the recalled I.M. Healthy products. The FDA would only say it is continuing its work.

“The FDA, along with our state and local partners, continues to investigate the production and distribution methods of the SoyNut Butter Co.,” an FDA spokesperson said Tuesday.

“If during the course of the investigation other contamination sources are discovered, the FDA will act swiftly to inform the public of any products that may pose a public health risk.”

As of Tuesday, the E. coli O157:H7 outbreak linked to the I.M. Healthy products included 16 confirmed victims across nine states. Fifteen ate I.M. Healthy brand soy nut butter products in the week before becoming sick. Fourteen of the victims are children. Ages of the outbreak victims range from 2 to 48 years, with a median age of 10. 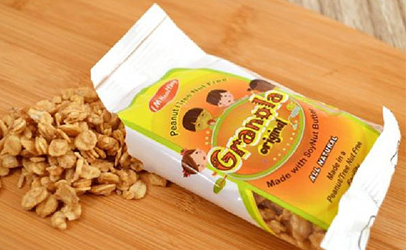 The company initially recalled only 15-ounce jars of its “Creamy” soy nut butter on March 3. It expanded the recall to include other sizes of that variety a day later.

“I.M. Healthy Products were distributed in multiple states and may have been purchased in stores or through mail order. They were also distributed to childcare centers and schools in multiple states,” according to the recall notice.

All “best-buy” dates of all varieties are included in the recall.

The recalled granola is packaged in individual serving packages, 12-ounce bags, 50-ounce bags and 25-pound bulk bags. I.M. Healthy Granola is available in Original, Apple, Blueberry, and Raisin and Cranberry. “Best-buy” dates are printed on the labels of the containers stamped in silver or black.

Consumers who have purchased I.M. Healthy SoyNut Butter products or I.M. Healthy granola products are urged not to consume the products and return them to the place of purchase for a full refund.

Public health officials are concerned that consumers and kitchens in schools, childcare centers and nursing homes may have the recalled products on hand and are urging people to check for the products and discard any unused portions.

The SoyNut butter company specifically markets to schools and childcare centers, according to its website.

“We’re serving over 2 million children a month,” the SoyNut Butter website states. “In everything from schools to daycare facilities, camps and Head Start programs.”

Advice for consumers nationwide
Anyone who has eaten I.M. Healthy brand SoyNut Butter products or anything containing the products and developed symptoms of E. coli infection should immediately seek medical attention and tell their doctors about the possible exposure to the bacteria.

“The symptoms of STEC infections vary but often include severe stomach cramps, diarrhea — often bloody — and vomiting,” according to the Centers for Disease Control and Prevention.

“Most people get better within 5 to 7 days, but some infections are severe or even life-threatening. Hemolytic uremic syndrome (HUS), a type of kidney failure, is a potentially life-threatening complication of E. coli O157 infection. Very young children and the elderly are more likely to develop severe illness and HUS than others, but even healthy older children and young adults can become seriously ill.”

Outbreak details
Of the 16 people confirmed by the CDC as outbreak victims, 14 are children. Victims are in nine states: Arizona, California, Maryland, Missouri, New Jersey, Oregon, Virginia, Washington and Wisconsin.

Fifteen of the victims reported eating I.M. Healthy brand SoyNut Butter in the week before they became ill at home, while “attending a facility,” or attending childcare centers, according to the CDC.

Overall, eight of the victims have had symptoms so sever that they required hospitalization. Five of them developed HUS.

Illnesses that occurred after Feb. 13 might not yet be reported due to the time it takes between when a person becomes ill and when the illness is reported. This takes an average of two to three weeks.