The U.S. Food and Drug Administration (FDA) recently sent warning letters to a food manufacturing facility in Ohio, a fish importer in South San Francisco, and a livestock operation in Kentucky. 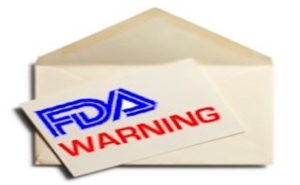 The agency’s warning letter dated May 12, 2016, to Hannibal Company Inc., of Worthington, OH, noted that numerous problems with insects and lack of appropriate hygiene and cleanliness had been found at its facility during seven inspections conducted in October and November 2015. The agency inspectors also found some misbranding and labeling issues involving the company’s baked goods. Adulteration violations noted in the letter included failure to effectively exclude pests from the processing areas and to protect against the contamination of food on the premises by pests. Specifically, FDA inspectors witnessed houseflies walking on egg knot dough, the dough mixer and on baking pans covered with parchment paper. Flies were also observed flying around the manufacturing facility and dead houseflies “too numerous to count were stuck on ten sticky flytraps hanging from the ceiling in the manufacturing area,” the agency’s warning letter stated. FDA further noted the company’s failure to make sure that employees conformed to hygienic practices while on duty in order to prevent contamination of food. This included making sure employees washed their hands thoroughly. However, the letter stated that the only hand-washing sink in the manufacturing area did not have hot water available, nor did it offer soap and hand towels. Equipment was not adequately cleaned between making product containing eggs and other product made without eggs, FDA stated, and numerous “insanitary conditions” were observed inside the facility such as standing water on the floor, a mold-like substance growing on the proofing room walls, a mold-like substance growing on steam vents that blow directly on in-process bread products, processing aprons stored with employee items, an excessive amount of trash stored within four inches of raw in-process materials, and plastic wrap used to wrap bread racks being stored directly on the processing room floor. N.A. Sales Company Inc. of South San Francisco, CA, was told by FDA in a letter dated May 16, 2016, that its seafood importing facility had serious violations of seafood HACCP regulations during a visit by inspectors on April 4-6, 2016. FDA stated that the company had no product specifications to address the hazards of histamine, environmental chemicals, aquaculture drugs, potential metal inclusion, undeclared food allergens/food additives, and pathogen growth and potential toxin formation including, for example, Clostridium botulinum and Staphylococcus aureus toxin formation. As a result, the agency noted, the company’s dried sardine and mackerel, shaved mackerel and scad, dried shaved bonito, frozen prepared pacific herring, frozen breaded horse mackerel, frozen yellowtail, frozen dried small sardine, frozen pacific squid, frozen cuttlefish, frozen monkfish, frozen dried jack mackerel, frozen dried flying fish, frozen dried pacific sand lance, and frozen red seabream loins imported from Japan are adulterated under federal regulations. In a warning letter dated May 16, 2016, David Bridgewater Farm of Bowling Green, KY, was told that inspections on Dec. 1 and 3, 2015, had revealed violations of the Federal Food, Drug, and Cosmetic Act. FDA indicated that the farm sold a calf on July 21, 2015, for slaughter as food. Analysis of tissue samples collected from this animal identified the presence of ciprofloxacin in the kidney tissue, the warning letter stated, and FDA has not established a tolerance for residues of ciprofloxacin (marker residue for enrofloxacin) in the edible tissues of cattle.

The agency also stated that the farm failed to identify or maintain treatment records of animals, or to segregate treated animals. Food from animals held under such conditions is adulterated within the meaning of the law, the letter stated. Further, the farm adulterated the new animal drug Baytril 100 (enrofloxacin) by not using it as directed by its approved labeling or by the servicing veterinarian’s prescription. Use of this drug in this manner is an extralabel use, FDA noted. Recipients of these warning letters have 15 working days from receipt to outline specific steps they have taken to come into compliance with the law.