The Hawaii Department of Health has confirmed the first case of rat lungworm disease in the state this year in an adult resident of West Hawaii on Hawaii Island.

The individual became seriously ill earlier this month and is being treated at a hospital. Laboratory results confirmed evidence of the rat lungworm parasite in the person’s spinal fluid. 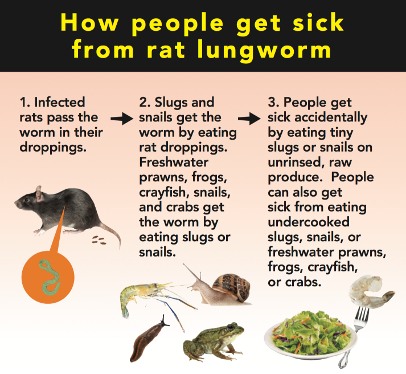 The state health department has not been able to determine the specific source of the infection, according to a public alert. The department is unable to provide any additional specific information about the victim.

“This is a reminder for everyone to take precautions and control snail, slug, and rat populations in and around properties, and especially home and school gardens and farms,” according to a statement from Aaron Ueno, Hawaii District Health Office administrator.

“We know that slugs, snails, and rats in all counties carry the parasite that can cause rat lungworm disease, and rain with wet conditions often brings more of these garden pests.”

Rat lungworm disease, officially known as angiostrongyliasis, can have debilitating effects on an infected person’s brain and spinal cord. The disease is endemic to Hawaii and is contracted when a person becomes infected with the parasite Angiostongylus cantonensis.

In Hawaii, people become infected by eating raw or undercooked infected slugs or snails. The snails and slugs are often found in and on fresh produce. It is not uncommon for people to become infected from undetected snails or slugs in salads.

Slugs and snails eat rat feces and serve as intermediate hosts for the parasites. Since the parasite cannot mature or reproduce in humans, they eventually die, but can cause physical problems.  These include eosinophilic meningitis and ocular Angiostrongylus.

In Hawaii, 80 percent of the land snails are carriers of the parasite.

The most common symptoms of infection include severe headaches and neck stiffness, but symptoms may vary widely among cases. The most serious cases experience neurological problems, pain, and severe disability.

The public is urged to take the following precautions to prevent rat lungworm disease: