A Colorado woman who was hospitalized with a Salmonella Oranienburg infection linked to the nationwide recall of sprouted chia seed powder has filed a lawsuit against Navitas Naturals of Novato, CA, which manufactures and sells the product. Carolyn Marie Shirley of Fort Collins, CO, is being represented by Marler Clark, the Seattle-based food safety law firm, and by co-counsel John Riley of Montgomery Little & Soran, PC, of Greenwood Village, CO. (Bill Marler of Marler Clark is the publisher of Food Saf 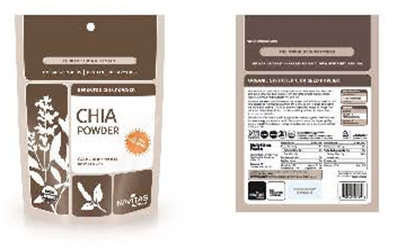 ety News.) “Many people think that healthy foods are not susceptible to Salmonella outbreaks, but that is just not true,” said Marler, who has been working to help improve food safety standards since representing victims of the Jack in the Box E. coli outbreak in the early 1990s. “Healthy foods are just as prone to Salmonella and E. coli as milk and eggs,” he added. Shirley is one of at least 65 people in the U.S. and Canada who have been sickened by several brands of the powdered chia seed product, which were recently been recalled in both countries. She became ill on or about March 14, 2014, after consuming Navitas Naturals chia seed powder purchased at her local Sprouts Farmer’s Market, which was subject to the recent recall. Soon after consuming the chia seed powder, Shirley began began suffering from a gastrointestinal illness. Her condition worsened daily until she required hospitalization. While hospitalized, she tested positive for Salmonella Oranienburg. The main symptoms of Salmonella infection include fever, diarrhea, nausea, vomiting and abdominal pain. At the time her complaint was filed against Navitas Naturals on Thursday, she was still recovering from the Salmonella infection. Salmonella is transmitted by food, water, or surfaces that have been contaminated with the feces of an infected animal or person. Many animals carry Salmonella, yet do not get sick. Salmonella can also be found in unpasteurized egg and milk products. It is commonly transmitted via the fecal-oral route from one infected person to another. Symptoms (which typically develop six to 72 hours after infection) may be mild, and an infected person can continue to carry Salmonella for weeks after symptoms have subsided. The best ways to prevent the spread of this illness are to avoid preparing food for others while ill, thoroughly cooking meat and egg products, not consuming unpasteurized eggs and milk products, and washing hands, especially after using the bathroom and before handling or preparing food.