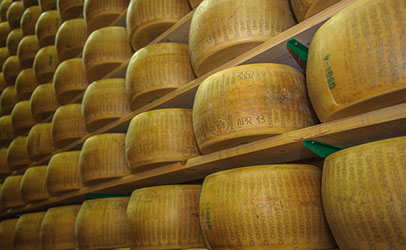 Last week, the world of artisan cheesemaking sounded some serious alarm over a stance that the U.S. Food and Drug Administration had seemingly adopted that would disallow the centuries-old practice of aging cheese on wooden shelving. In the aftermath, FDA apparently backed off from its position. But that’s not stopping Vermont Congressman Peter Welch from moving to head off the agency before it can implement any such regulations. Welch, a Democrat, has introduced an amendment to the agriculture appropriations bill for fiscal year 2015 that would expressly prohibit FDA from using any funds to prevent or limit the use of wooden shelves for aging cheese. In a statement reiterating his plans to introduce the amendment, Welch said that FDA’s clarification on their stance directly contradicts an earlier statement they had put out, including information in an email to his office. “Artisan cheese makers cannot afford to live with this threat to their livelihoods caused by regulatory ambiguity at the FDA,” Welch wrote. The charges of ambiguity are the culmination of communications from FDA over a span of five months, starting in January 2014 with an email from FDA Egg and Dairy Branch Chief Monica Metz to officials at the New York State Department of Agriculture and Markets. The New York officials were asking FDA to clarify its position on wooden shelving after an artisan cheese producer in the state had been told that she should replace her wooden shelving with another material after consecutive FDA inspections found Listeria monocytogenes contamination on the shelves. Metz emailed a document to the officials stating that wooden shelving did not conform to current good manufacturing practices, which require materials capable of being adequately cleaned and properly maintained. Wood did not meet those criteria, Metz stated, because its porous nature may foster bacteria growth and prevent adequate cleaning and sanitizing. The document also cited a number of recent studies concluding that Listeria monocytogenes could survive cleaning and sanitation on wooden boards. In the email containing the document, Metz implied that the stance was the agency’s “policy on aging cheese on wooden boards” and mentioned that it had been cleared for release. Since January, the New York Department of Agriculture has been in dialogue with FDA about the position, and the agency has allegedly been unwilling to change its stance, according to New York Department of Agriculture Commissioner Richard Ball. “I am very concerned about the damage this policy could do to these businesses, not only in New York, but across the country, and respectfully request a suspension of any enforcement actions until a full science-based peer review is completed,” Ball wrote. In March, Welch’s office received an email from FDA stating that wooden shelving for aging cheese was not permitted and never had been. The email reiterated Metz’s points about wood not meeting good manufacturing practice standards due to its porous nature. Cheesemakers began a public pushback in the first week of June, gaining widespread attention by the next week. Headlines interpreted the situation as FDA waging a war on the artisan cheese world. On June 11, FDA issued a clarification statement that the agency was not banning the use of wooden shelving for aging cheese, adding that the agency had never taken enforcement action solely on the grounds of a cheesemaker using wooden shelves. “The communication was not intended as an official policy statement, but was provided as background information on the use of wooden shelving for aging cheeses and as an analysis of related scientific publications,” the statement read. “Further, we recognize that the language used in this communication may have appeared more definitive than it should have, in light of the agency’s actual practices on this issue.” A spokesman for the New York Department of Agriculture and Markets told Food Safety News they were satisfied with that clarification. Welch, however, said he was pushing forward with the amendment to the agriculture appropriations bill to guarantee that artisan cheesemakers don’t face any regulatory scrutiny for continuing to use wooden shelves. A spokesman for Welch’s office suggested to Food Safety News on Friday that the congressman remains dubious regarding FDA’s position: “The email our office got [from FDA] lays out their position pretty clearly.”