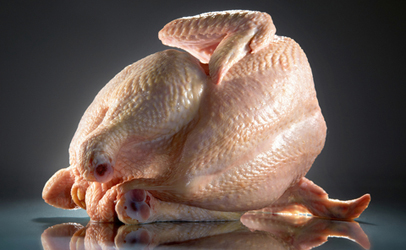 At least 389 people in 23 states and Puerto Rico have been sickened by strains of multidrug-resistant Salmonella Heidelberg in connection with chicken produced by Foster Farms, according to the U.S. Centers for Disease Control and Prevention. That number is up 27 illnesses from an Oct. 30 report of 362, and Louisiana and Illinois have been added to the case map. CDC reports that 40 percent of victims have been hospitalized, and 74 percent were reported in California. Ill persons range in age from less than 1 year to 93 years, with a median age of 20 years. Fourteen percent of the victims have developed blood infections as a result of their illness. Typically, only five percent of people with Salmonella infections develop blood infections. Foster Farms has not initiated a recall, instead opting to comply with U.S. Department of Agriculture requests to mitigate issues at three central California facilities tied to the outbreak. The products involved in the outbreak are identified by one of three USDA mark of inspection numbers: P6137, P6137A and P7632. Kroger Co. stores, which also include Fred Meyer, Fry’s, King Soopers and others, pulled implicated packages of Foster Farms chicken from their shelves earlier this month. On Oct. 17, Costco expanded an earlier recall of rotisserie chickens from one store in South San Francisco, CA, in connection with the outbreak.