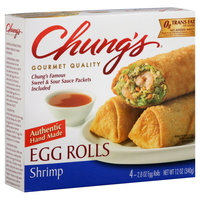 Update (April 10, 11:30 a.m. PST): In a press release emailed to Food Safety News, Chung’s announced that the court has allowed the company to resume production on its non-seafood products, including its chicken, pork and vegetable egg rolls. According to Chung’s, the court order noted that the U.S. Department of Agriculture was satisfied with Chung’s production of pork and chicken egg rolls, which the agency oversees. The U.S. Food and Drug Administration oversees production of shrimp and vegetable egg rolls, and the FDA’s chief concern is with production of the shrimp rolls. Chung’s president Charlie Kujawa said he expected the Houston-based facility, which employs 139 people, to return to full operation by next week. Original story below: Chung’s Products, which sells packaged Asian food products in all 50 U.S. states, has been shut down for producing food under unsanitary conditions in violation of the U.S. Food and Drug Administration’s Food, Drug and Cosmetic act. The closure order comes from a U.S. District Judge ruling on a three-year-long injunction lawsuit filed against Chung’s by the FDA in March 2010. The company’s processing and distribution facilities will remain shuttered until the company meets a number of FDA requirements, including developing a seafood hazard analysis plan, training employees on proper sanitation, and repaying the FDA for multiple investigations at the company’s Houston facility between 2005 and 2009. There have been no foodborne illnesses associated with Chung’s and no recall has been issued for any of the company’s products, which include packaged egg rolls, spring rolls and pot stickers. The products are sold at a variety of retailers nationwide, including Walmart, Target, Kroger and several others listed on the company’s website. The FDA has had concerns with Chung’s since at least 2007, when the agency issued a warning letter to the company noting “serious violations” found during eight days of inspections in May and June of that year. At the time, the agency was chiefly concerned that Chung’s shrimp egg rolls — which were sealed and frozen for distribution but held at refrigerator temperatures in stores — were not adequately packaged to control the growth of Clostridium botulinum, the bacteria that causes botulism. Inspectors also noted the need for more verification that the product’s cooking instructions adequately controlled for pathogens, as well as several sanitation issues related to water used during food preparation, cleanliness of food contact surfaces and inadequate protection from cross-contamination of insanitary objects such as condensation dripping onto food from overhanging airconditioners. According to the FDA, a 2009 inspection found that the company had still not taken measures to control against Clostridium botulinum in its seafood egg rolls. That same inspection also found the presence of Listeria monocytogenes in the company’s egg roll processing environment. In March 2010, the FDA filed its request for injunction specifically regarding Chung’s seafood products, but not other food made by the company. “FDA inspections have revealed significant deviations from the seafood Hazard Analysis and Critical Control Point (HACCP) requirements, which are designed to protect the public from food safety hazards in fish and fishery products,” the request announcement read. “Failure to comply with the seafood HACCP regulations renders food adulterated under the [Food, Drug and Cosmetic Act].” According to the Houston Chronicle, on April 3, U.S. District Judge Melinda Harmon issued the injunction of all food production at the Chung’s facility until the company could meet the FDA’s requirements. The injunction also named Chung’s president Charlie Kujawa and former director of quality assurance Gregory Birdsell individually. Court records show that Kujawa and Birdsell delayed or refused FDA inspectors entry to their facility at various times, the Chronicle reported. “Based on Chung’s record of noncompliance, the court finds a cognizable danger of future violations necessitating a permanent injunction,” Harmon wrote. Chung’s produces vegetable and shrimp egg rolls overseen by the FDA, as well as chicken and pork egg rolls overseen by the U.S. Department of Agriculture. The company also imports prepared shrimp spring rolls from China, which it sells under the Chung’s brand name. Food Safety News has contacted the FDA regarding the injunction and should have more information Wednesday.