Federal officials are urging the public to not eat Kellogg’s Honey Smacks and to throw away any they have in their homes because of a new Salmonella outbreak that has already sickened 73 people. 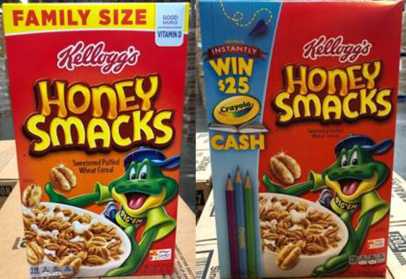 The FDA posted a recall notice from Kellogg Co. on Thursday, June 14, that says only the Honey Smacks flavor of cereal is implicated.

Reuters news service reported the nationwide recall covers 1.3 million cases of the cereal. No deaths have been confirmed, but the sick people are spread across 31 states, according to the Centers for Disease Control and Prevention.

The CDC urges that even if some of the cereal was eaten and no one got sick immediately after eating it, consumers should throw away of the cereal they have in their homes. If the cereal has been stored in containers other than the original packaging and consumers don’t remember the brand or type,they should throw it away. Additionally, be sure to thoroughly wash the cereal container with warm, soapy water before using it again to remove harmful germs that could contaminate other food.

Kellogg launched an investigation with the third-party manufacturer who produces Honey Smacks after federal officials contacted the company, according to the Kellogg recall notice.

“Ill people in this outbreak reported this cereal (Honey Smacks) more often than any other cereals or food items,” according to the outbreak notice from the Centers for Disease Control and Prevention.

The recall notice on the Food and Drug Administration website includes information to help consumers identify the recalled cereal.

How to identify the recalled cereal
The affected product includes the following varieties distributed across the United States as well as limited distribution in Costa Rica, Guatemala, Mexico, the Caribbean, Guam, Tahiti, and Saipan. The BEST if Used By” date can be found on the top of the cereal box, and the UPC code can be found on the bottom of the box.

Outbreak statistics
The CDC reports that outbreak illnesses started on dates from March 3 to May 28. Ill people range in age from less than 1 year old to 87. Out of 55 people with information available, 24 have been hospitalized. A 44 percent hospitalization rate is unusually high for Salmonella infection cases. No deaths have been reported. Illnesses that occurred after May 22 might not yet be reported to the CDC because of the time it takes between when a person becomes ill and when the illness is reported. This takes an average of two to four weeks.

As of Thursday, 73 people infected with the outbreak strain of Salmonella Mbandaka had been reported from 31 states.

Advice to consumers
Anyone who has recently eaten Honey Smacks cereal and developed symptoms of Salmonella infection should see a health care provider and tell them about the possible exposure to Salmonella bacteria.