A second dog food recall — this time by Against the Grain Pet Food Inc. — because of the barbiturate pentobarbital is underway in the wake of a recall of Evanger’s branded dog food, and it appears members of the same family own both companies.

Pentobarbital is a sedative often used to euthanize animals. 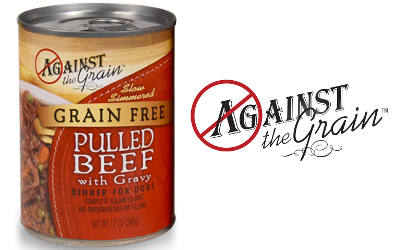 No adverse reactions to the Against the Grain brand “Pulled Beef with Gravy Dinner for Dogs” had been reported as of the posting of that brand’s recall late Tuesday afternoon.

“In 2015, this one lot of product was distributed to independent pet retail stores in Washington and Maryland, though it has been verified that this lot is no longer on any store shelves,” according to the Against the Grain recall notice on the Food and Drug Administration website.

“Consumers may return any can with the aforementioned lot number, to their place of purchase and receive a full case of Against the Grain food for the inconvenience. For any questions, customers may contact the company at 800-288-6796.”

Anyone who has fed the recalled dog food to their pets and noticed unusual behavior should seek the advice of a veterinarian and mention the possible exposure to the drug residue.

Eating food contaminated with pentobarbital can cause side effects such as drowsiness, dizziness, excitement, loss of balance, nausea nystagmus (with) eyes moving back and forth in a jerky manner, inability to stand and coma, according to the recall notice.

However, the companies’ operations appear to be somewhat cooperative and they may share manufacturing facilities and ingredients. Evanger’s is owned by Holly and Joel Sher, whose daughter Chelsea Sher serves as vice president for exports at Evanger’s.

Chelsea Sher is listed as the owner of the Against the Grain trademark. She co-founded Against the Grain with her twin brother Brett in 2012, according to her LinkedIn profile. She and Brett posted a video on YouTube explaining the Evanger’s recall.