The most recent outbreak from Escherichia coli O157:H7 in romaine lettuce spurred me to pull up an old draft, trim it and post it in an attempt to promote public health. Enjoy.

In the Spring of 2017 while sprinkling balsamic vinegar over chopped romaine lettuce, I wondered if anyone had published on the bactericidal effect of vinegar on lettuce. That acetic acid is the most lethal of the organic acids is well known.

In addition to the most recent outbreak, (Marler 2018b) there have been several outbreaks involving lettuce (Marler 2018a). Thus a quick search of: Salmonella Vinegar Salad yielded Faith et alia 2012. Because they didn’t include Escherichia coli O157:H7 and the recent popularity of that pathogen in lettuce, there is room for additional work.

Therefore, I emailed some fellow food microbiologists with my findings averring there is still room for advancement of the science. It would be a good project for Extension and they might become as famous as Jillian Clarke or Robyn C. Miranda for their work on the “five second rule.” (Co-authors were Hans Blaschek and Don Schaffner.)

As the responses were lukewarm, I pursued this literature search. My fellow food microbiologists recommended that I develop the article into a paper for “Food Protection Trends.” Alas, requests for comments on FSIS’ proposed poultry and swine modernization have taken my free time until this outbreak.

Thus, this short article on making lettuce safer in the home. There are many opportunities and challenges to make lettuce safer at preharvest and before it enters homes but that is another project the Berry Et alia 2015 stimulated for me.

This is not a complete review but papers that would be useful to consumers. They are summarized in chronological order.

First:
Before treating your lettuce or other fresh greens, remove broken or bruised leaves. The breaks enable pathogens to enter the cells and thus, become protected from the lethal effect of the vinegar or whatever antimicrobial you use. Additionally, the liquid from broken or bruised leaves aids the multiplication of both good and bad bacteria associated with the produce (Takeuchi & Frank 2000, Brandl 2008). Washing the leaves may reduce any unattached bacteria but has a poor effect on removing attached bacteria. There are many ways to sanitize or disinfect salad greens. Irradiation, cold plasma, electrolyzed water, and chlorine come to mind. But these are not readily available in most home kitchens. Thus, the purpose of this article: To review current science and offer practical recommendations to improve the safety of salads.

Second:
Spoiler alert, vinegar kills pathogenic bacteria. Fans of the Law of Mass Action, will be happy that vinegar’s lethal effect is dependent on time, temperature, and the concentration of acetic acid (usually 6%). Balsamic vinegar, with its additional phenols is the cat’s pajamas of lethality.

Third:
There’s plenty of science on the effect of vinegar.

Entani et alia 1998, was a Japanese team concerned about a 1996 outbreak of Escherichia coli O157:H7. They wrote, “Vinegar had a bactericidal effect on food-borne pathogenic bacteria including EHEC 0157:H7.” They tested the vinegars on the surface of nutrient agar, not lettuce.

Wu et alia 2000, at the University of Georgia and the Centers for Disease Control and Prevention, prompted by a 1998 shigellosis outbreak, treated parsley. The parsley, either chopped or whole was inoculated with three strains of Shigella sonnei. The treatments were straight vinegar, diluted vinegar or Na hypochlorite 0 to 200 ppm free chlorine for 5 min at 4°C or 21°C. Undiluted vinegar (5.2% or 7.6%) or > 150 ppm Cl reduced the S. sonnei population on whole leaves by over 6 Log10.

Vijayakumar and Wolf-Hall 2002, tested three organic acids and diluted bleach on iceberg lettuce leaves in flasks at room temperature and at 4°C. “Diluted solutions of various household sanitizers (apple cider vinegar , white vinegar , bleach, and a reconstituted lemon juice product) . . . 35% white vinegar (1.9% acetic acid) was the most effective in reducing E. coli levels (with a 5-log 10 reduction after 5 min with agitation and after 10 min without agitation),” they wrote.

Faith et alia 2012, used cocktails of either Salmonella sp. or L. monocytogenes on intact spinach leaves. The commercial vinegars were: rice vinegar, distilled white vinegar, white wine vinegar, apple cider vinegar, red wine vinegar, and balsamic vinegar with a commercial 100% natural canola oil. The spinach was treated in a Whirl-Pak bag by adding 20 ml of vinegar (diluted 50% with either water or oil) and held at room temperature for 30 minutes. The vinegars reduced the resident microbiota, primarily Gram -, about 3 logs10. For the pathogen trials, they diluted the vinegar 1:2 with oil. Traditionally, a vinaigrette consists of 3 parts oil and 1 part vinegar.

The authors wrote, “Allowing the mixture to sit at room temperature for at least 20 min resulted in a substantial reduction (up to 2.0 log CFU) in numbers of S. enterica. Vinegar and oil caused a limited reduction in CFU (0.5 log) for spinach leaves inoculated with a cocktail of Listeria monocytogenes strains.”

Sirsat and Neal 2013, promoted Aquaponics over soil grown lettuce. They tested undiluted white vinegar, apple cider vinegar, red wine vinegar and lemon juice. Adding Salmonella or E. coli cocktails to undiluted vinegar or juice showed white vinegar was the most lethal. Treating inoculated lettuce with straight or diluted white vinegar (5% or 2.5% acetic acid) for 60 seconds resulted in a 2-3 Log10 reduction of Salmonella, E. coli, and coliforms. Their paper is open access so you can look at their Fig 3.

The authors wrote, “The maximum observed log reduction of L. monocytogenes was 2.15 ± 0.04 for balsamic vinegar (50% (v/v)), 1.18 ± 0.06 for white wine vinegar ((50% (v/v)) and 1.13 ± 0.06 for acetic acid ((50% (v/v)). Washing with water only reduces 0.05 ± 0.04 log CFU/mL of L. monocytogenes numbers.” The authors citing previous papers opined that, “The stronger bactericidal effect of balsamic vinegar may be also related to the presence of compounds with antimicrobial properties resulting from the fermentation of grape juice and from grape juice itself. It is known that grapes contain a number of phenolic compounds that exhibit antilisterial activity, particularly polymeric phenolic compounds: resveratrol, vanillic acid, caffeic acid, gallic acid and flavonoids (rutin and quercetin)”

Poimenidou et alia 2016, treated cut strips of romaine lettuce or spinach by washing with several solutions. The solutions were: water, a distilled aqueous extract of oregano, Na hypochlorite (60 and 300 ppm free chlorine), Citrox® (0.5%), vinegar (6% acetic acid), 2% lactic acid, and double combinations of Citrox, lactic acid and oregano. The treatment was immersing 310g of inoculated leaves in two liters of solution for either 2 or 5 minutes at room temperature. After treatment, half of the leaves were rinsed in ice water. All trials were repeated twice in triplicate. They measured both E. coli O157:H7 and the resident microbiota.

“For each treatment, samples of 20 g each were analyzed: (i) before treatment to estimate the attached population; (ii) after treatment, to assess the immediate antimicrobial effect of the washing solutions, and (iii) after 7-day storage at 5 °C.” Thus, 18 samples per treatment.

Park et alia 2016, treated laver, a seaweed with dilutions (5%, 10%, & 15%) of vinegar containing 6% acetic acid. They inoculated the laver with MNV-1, a Norovirus surrogate, or E. coli. Treated lavers were sampled after 1, 3, 5, and 7 days of storage at 4°C. The MNV-1 titer gradually decreased with time and vinegar concentration but there was little difference between treatments and water only. OTOH, E. coli survival was greatly affected by the vinegar concentration and time. The E. coli count in 0% vinegar increased slightly, 0.6 Log10 in 7 days. For vinegar-treated laver the reductions were 3.4 Log10 for 15%, 2.5 Log10 for 10%, and 2.0 Log10 for 5% vinegar after 7 days.

Bakir et alia 2017, tested 18 vinegars with the disc diffusion method. They used Salmonella Typhimurium, Staphylococcus aureus, and Escherichia coli. The vinegars included 15 different fruits or substrates from three different companies using commercial submerged fermentation of diluted juice or a traditional method. Balsamic vinegar also had the highest antimicrobial activity. The authors concluded, “Antibacterial activities of vinegars could partly be related to both their acetic acid contents and the pH values, and also to their phenolic contents.” 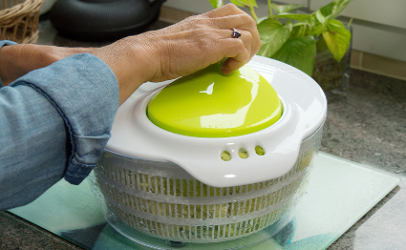 My conclusions
Vinegar is a useful household sanitizing agent for leafy greens and other produce. But: What about blue cheese or Russian dressing? I don’t know. Haven’t seen any research. Personally, I would douse the lettuce with plain white vinegar then finish chopping the other salad ingredients. Finally give the greens a quick water rinse, shake (or spin), then toss the remaining ingredients with your favorite creamy dressing.

Greater time, temperature, or concentration increases the bactericidal effect. There are differences in the effect on leaves. Leaf surfaces differ in hydrophobic and hydrophilic substances. These affect both bacterial attachment and the ability of the treatment to contact the attached bacteria – or – virus.

Brandl MT. 2008. Plant lesions promote the rapid multiplication of Escherichia coli O157:H7 on postharvest lettuce. Appl Environ Microbiol. 74: 5285-9. doi: 10.1128/AEM.01073-08. OPEN ACCESS “The results of this study indicate that plant tissue damage of various types can promote significant multiplication of E. coli O157:H7 over a short time and suggest that harvesting and processing are critical control points in the prevention or reduction of E. coli O157:H7 contamination of lettuce.”

Sirsat, Sujata A. and Jack A. Neal. 2013. Microbial Profile of Soil-Free versus In-Soil Grown Lettuce and Intervention Methodologies to Combat Pathogen Surrogates and Spoilage Microorganisms on Lettuce. Foods. 2: 488–498 OPEN ACCESS

Letter from the Editor: Careful what you step in when on Capitol Hill

Publisher’s Platform: J.M. Smucker and FDA, I have some questions