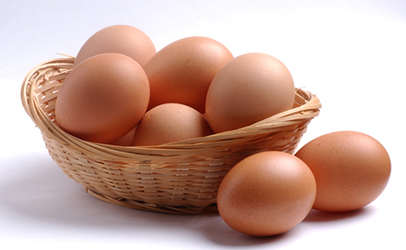 American travelers to Europe may have noticed that people “across the pond” often store raw shell eggs at room temperature. They can safely do that because of the way eggs are produced in Europe, but it can’t be safely done in the U.S. because of Salmonella. Salmonella bacteria, discovered in 1885 and named for the man who headed the U.S. Department of Agriculture (USDA) back then, can be transmitted via the outside of an egg if there is chicken manure present, or from inside the egg via the hen. Salmonella infections are common in the U.S., causing at least 42,000 illnesses each year, according to the Centers for Disease Control and Prevention (CDC). However, CDC notes that the actual number of Salmonella-related illnesses is likely much higher since many people don’t seek health care for their symptoms. Salmonellosis causes diarrhea, fever and abdominal cramps 12-72 hours after infection by the bacteria, symptoms usually last four to seven days, and most people recover without treatment. Some people, however, develop serious diarrhea requiring hospitalization, and Salmonellosis can be fatal if the infection spreads from the intestines to the bloodstream and other parts of the body — unless the person is promptly treated with antibiotics. USDA requires raw shell eggs to be washed before they are sold. After being rinsed in hot water and dried, most large-volume processors then use a sanitizing rinse at the processing plant (this step is required for all USDA-graded eggs). Many processors then apply a light coating of food-grade mineral oil to the eggs to keep them from drying out. In the U.K., the majority of egg producers vaccinate hens to help prevent Salmonella and generally do not wash or clean raw eggs before sending them to market because it may damage the shell, which can function as a barrier to pathogens. Their philosophy is to retain the thin coating called the “cuticle” that naturally occurs on the outside of the egg. Refrigerating raw eggs is discouraged in the U.K. since the condensation that occurs after eggs are chilled and then warmed could potentially allow Salmonella bacteria to get inside the shell. These egg production practices have reduced the incidence of Salmonella illnesses in Britain from 14,771 reported cases in 1997 to 581 cases in 2009. Egg producers in the U.S. are starting to vaccinate laying hens more often than in the past, although the Food and Drug Administration (FDA) does not require it. After considering mandatory vaccination of hens for Salmonella in 2004, FDA concluded that the practice was promising but that “more information on the effectiveness of vaccines needs to be generated before we would mandate vaccination as a (SE) prevention measure.” In 2010, a Salmonella outbreak that sickened at least 1,300 people in the U.S. was linked to eggs produced in Iowa. About 550 million eggs were later recalled in connection with that outbreak.